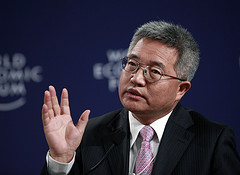 In a remarkable article in the Wall Street Journal, the increasing influence of Austrian school thinking in communist China is exposed. It revolves around the efforts of a single individual, Zhang Weiying, the founder of the China Center for Economic Research at Peking University.

This is a mind-altering experience, reading this article. It puts my pre-existing perceptions and prejudices into disarray. When the Chinese government committed an astounding $3.5 trillion – half of the country’s gross domestic product – to stimulate the economy in 2008, it expected great things to happen: it would put people to work, counteract the Great Recession then enveloping the US, and show just how wonderful a state-controlled economy could be.

It didn’t work. Says the Journal:

Officials claim the economy grew at 7.6%…between April and June…Skeptics think the real number is closer to 4%. (One London research house says 1%).

Meanwhile, industries dominated or favored by the state, such as steel or solar power [No!], are idling from overcapacity. Countless sheets of copper are reportedly stacking in warehouses, blocking doorways and exemplifying Hayek’s notion of malinvestment.

Zhang somehow escaped the state indoctrination of Keynesianism and started thinking on his own. His influence has grown so remarkably, and the economic disaster enveloping China now becoming so obvious – there are now more than 180,000 mas protests a year “over land grabs and government bullying” – that Premier Wen Jiabao has had to defend his government’s Keynesian policies, calling them a “scientific response” to the crisis, and denying that its impact has turned out to be negative after all.

Doesn’t that sound like the back-pedaling that Bernanke is doing now as challenges to his latest fool-hardy move of QE3 continue to mount?

After decades of a planned economy, says Mr. Zhang, “the price [of everything] was distorted” and the government’s solution was to “set up a price research center with a big computer…and adjust prices according to this calculation.” Of course, “they couldn’t get any results.”

The fact that Zhang is even able to express this position without disappearing into the night, never to be heard from again, is remarkable. As I said, the article is a mind-altering experience.

Austrian School China Economy Great Recession Keynesian Recession Wall Street
This entry was posted on Wednesday, October 17th, 2012 at 6:44 am and is filed under Economics, Politics. You can follow any responses to this entry through the RSS 2.0 feed. Both comments and pings are currently closed.
Many of the articles on Light from the Right first appeared on either The New American or the McAlvany Intelligence Advisor.