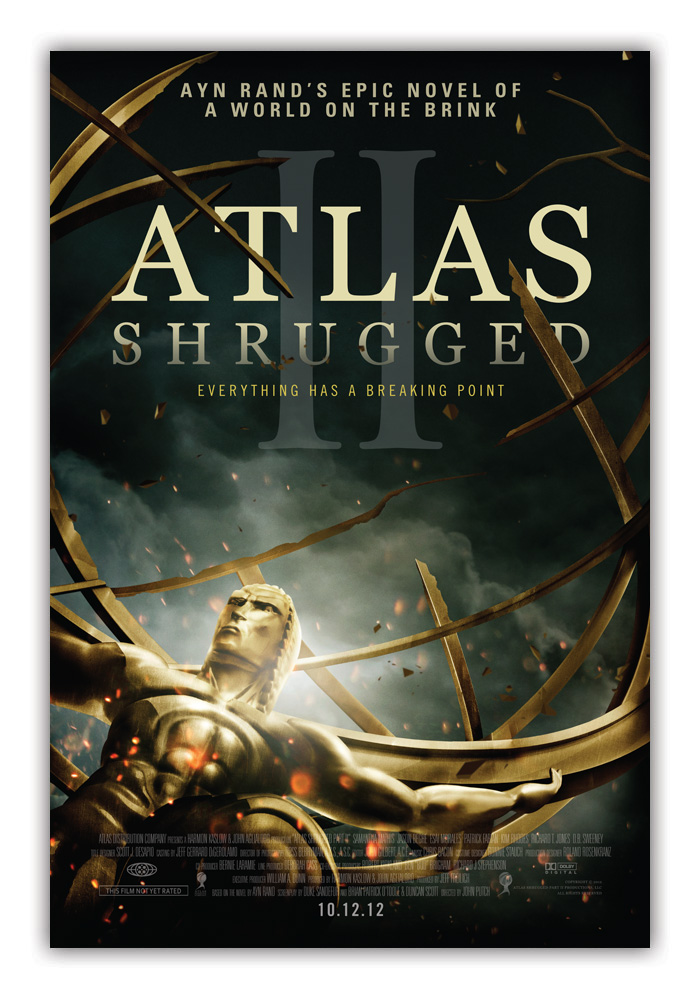 Part 2 of the trilogy of Ayn Rand’s Atlas Shrugged was, by turns, eerie, chilling, disappointing and affirming. With twice the budget of Part 1 it is broader in scope with a closer adherence to Ayn Rand’s original novel. With a new cast, many had high expectations. In some respects it succeeded, in others it was a dismal failure.

Opening like a James Bond thriller, Dagny Taggart (Samantha Mathis) is driving her private jet at maximum velocity in an attempt to catch another pilot over the Colorado mountains. She cries out in exasperation the theme that appears throughout the movie: “Who is John Galt?” The implication is that the other pilot has the answer.

The film flashes back to her frustration nine months earlier when she is unable to learn who the inventor is of an energy generator that operates on static electricity – developing essentially free energy with no pollution. The story line is simplicity itself: creative entrepreneurs are deemed to be enemies of the state and their capital (including their patents, ideas and inventions) must be forcibly relinquished – “gifted” in the movie –  to the state, all in the name of egalitarianism.

With six protagonists and five antagonists, the film could have been simple to produce. But with 56 other secondary characters, some assuming major but brief roles in the film, the story line is interrupted frequently, sometimes unforgivably so.

The film was eerie as it showed gasoline selling for $42.50 a gallon, and costing Taggart nearly $865 to put 20 gallons into her truck. The film also managed to show downtown streets nearly deserted except for some on bicycles, as a result.

It had chilling moments, such as the “star chamber” scene where Hank Rearden (Jason Beghe) is being charged at a Unification Board Meeting – essentially a Star Chamber – with violating the latest of draconian regulations: doing business with a friend. His penalty: a $50 million fine and 10 years in jail.

And another when incompetence meets politics: the head-on collision between two trains deep inside the Taggart Tunnel in Colorado, killing all aboard.

It was disappointing in that Rand’s stiff dialogue, carefully softened in Part 1, was allowed to control the conversations in Part 2, leaving the characters flat and bland and largely uninteresting. Lillian (Kim Rhodes), Reardon’s jilted and jealous wife is evil incarnate but is not allowed to develop fully in the film. In general, the film seemed to be put together in a rush, in an attempt to meet some deadline.

The producer said that investors in the project were hoping to have an impact on the upcoming election, and that obviously hurried the project, to its detriment.

There were great moments of clarity and confirmation for the Randian faithful. In his Star Chamber rebuttal, Rearden challenged the judges with having no authority to charge him with doing anything wrong, and accused them of being in the employ of looters – of “stealing their power from our freedom.” This brought huzzahs from the court’s audience, but none from the theater-goers. But even in that moment of challenge by an individual to the power of the state to steal under the guise of law, the film fails to present the real agony Reardon is suffering: how can such vermin have such influence?  What has happened to morality in a world gone mad? He asks, as he leaves the courtroom: “How can such small people do so much damage?”

Another moment of affirmation about how the free market works to solve problems that government cannot, while providing for the needs and wants of unknown participants in that market, came when Taggart confronts Ken Danagger (Arye Gross), the owner of Danagger Coal in Pennsylvania, to urge him not to go on strike but to stay and fight the tentacles of overweening government. Danagger says his coal is purchased by Reardon who uses it to make his special metal rails which Dagny purchases to build her railroad on which she hauls Danagger’s coal. Danagger says it’s a “perfect balance” but it is thrown inevitably into disarray by government bureaucrats – the looters and moochers and cheaters, as Rand calls them.

Two characters especially stand out: the perfect arrogant government bureaucrat with too much authority, Wesley Mouch (Paul McCrane), and Francisco d’Anconia (Esai Morales), the poor little rich kid playboy who destroyed his family’s copper mines to keep them from being looted by the government. Each brought life and breath and color to an otherwise staid and cold and uninteresting series of characters.

To make a fine point: in an attempt to make the film appear to be relevant and current to today, two current idioms were jarringly inserted into the dialogue: “catchy,” when Reardon learned that the government was going to rename his Reardon Metal into “Miracle Metal,” and when d’Anconia confronted James Taggart (Patrick Fabian) with “How’s that working for ya?”

The film ended up where it began: Dagny lost control of her aircraft during the opening chase, crashing into…no, wait…crashing through…and then surviving an unsurvivable crash, just in time to be rescued by…John Galt.

The faithful will want to see Part 3. Regular visitors who just happened to buy a ticket will be bewildered and disappointed, and wonder what all the fuss was about. Any impact on the election in November is dubious at best.

Ayn Rand Colorado Energy Free Market Freedom Regulations
This entry was posted on Tuesday, October 16th, 2012 at 11:34 am and is filed under Reviews. You can follow any responses to this entry through the RSS 2.0 feed. Both comments and pings are currently closed.
Many of the articles on Light from the Right first appeared on either The New American or the McAlvany Intelligence Advisor.