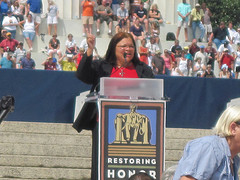 This is fairly amazing to me. 95 percent of blacks voted for Obama in the last election. If he loses any significant percentage of that vote, his doom is sealed:

Unhappy with President Barack  Obama‘s support of same-sex marriage, a group of African-American faith  leaders have announced a campaign aimed at stripping 25 percent of the black  vote that went to Obama  in 2008 (95 percent)…

These leaders – and they are leaders!– have committed to spend $1 million in several states opposing Obama’s reelection. They’re hoping there is enough “faith” and “gumption” left in their target market to turn voters away from Obama:

The black community is among the most religious in America and we are offended  that President Obama has announced his support of same-sex marriage, that the  NAACP has blindly supported the secular views of the Democratic Party, and that  their national platform plainly supports same-sex marriage,” said Apostle Claver  Kamau-Imani of RagingElephants.org, and a God Said founder, in a statement. “I am confident that this message will be well received and acted upon on Election Day.

Their intentions are honorable and their strategy appears to be sound:

During the 2008 elections, 70 percent of African Americans voted to ban  same-sex marriage in California while they also voted for Barack Obama for  president,” added Dr. Alveda King, niece of Dr. Martin Luther King, Jr. and  black outreach director of the pro-life Priests for Life. “We fully intend to  shift 25 percent of the black vote  from the 2008 election by charging every voter to examine each candidate and  vote for the one that supports their core belief in natural marriage.

My hope is that they will turn away from Obama in droves, sufficient in numbers to make a difference. It’s going to require a huge paradigm shift in their thinking, however, to move from voting Democratic, to voting for a white Republican. Especially a white Republican who is virtually indistinguishable from Obama on so many issues. Here is this from Romney on gay marriage:

Like the vast majority of Americans, I’ve opposed same-sex marriage, but I’ve also opposed unjust discrimination against anyone, for racial or religious reasons, or for sexual preference. Americans are a tolerant, generous, and kind people. We all oppose bigotry and disparagement. But the debate over same-sex marriage is not a debate over tolerance. It is a debate about the purpose of the institution of marriage and it is a debate about activist judges who make up the law rather than interpret the law.

2012 Elections Conservative Democrat Mitt Romney NAACP Obama Republican
This entry was posted on Sunday, October 14th, 2012 at 6:00 am and is filed under Politics, Religion. You can follow any responses to this entry through the RSS 2.0 feed. Both comments and pings are currently closed.
Many of the articles on Light from the Right first appeared on either The New American or the McAlvany Intelligence Advisor.