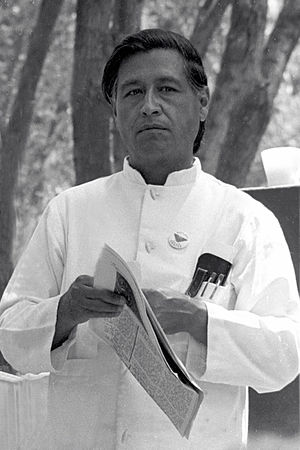 CNN reported that President Obama has dedicated a monument to Cesar Chavez:

Describing it as a “day that has been a long time coming,” President Barack Obama made modern history Monday by announcing the creation of a monument to honor the late labor and civil rights activist Cesar Chavez…

The president spoke at a ceremony in Keene, California, on land known as Nuestra Senora Reina de la Paz, where, from the 1970s until the early ’90s, Chavez lived and led his farm worker movement.

Decades ago, Obama said, when Chavez began his farm worker movement, “no one seemed to care about the invisible farm workers who picked the nation’s food — bent down in the beating sun, living in poverty, cheated by growers, abandoned in old age, unable to demand even the most basic rights.”

“Cesar cared,” the president said. “In his own peaceful and eloquent way he made other people care too.” Chavez’s organized labor marches and other protests, including a boycott of table grapes, led to “some of the first farm worker contracts in history,” Obama said. “Let us honor his memory, but most importantly let us live up to his example.”

Obama wasn’t alone in singing Chavez’ praises. Joining the chorus was Ken Salazar, Obama’s Secretary of the Interior and former Senator and State’s Attorney General from Colorado. Salazar called Chavez “one of the heroes of the 20th Century.”

Of course he would. Let’s look for a quick moment at Chavez’ background, courtesy of Warren Mass, writing in The New American:

Chávez was recruited and hired in the early 1950s by a staff member for Saul Alinsky’s Industrial Areas Foundation. [Author Gary] Allen observed that “Chávez could have found no better training ground for revolution. His mentor Alinsky describes himself as a ‘professional radical’ and is the author of Reveille For Radicals and Rules for Revolution…

He runs a prep school in grass-roots organizing for revolution based upon picket lines, boycotts, mass meetings, rent strikes, demonstrations, and sit-ins.”

Allen noted that Chávez “spent six years in Chicago studying at the “Alinsky School of Revolution” before his “teachers” thought he was ready to return to California to found the N.F.W.A.”

In his article, Mass quotes from Gary Allen again:

On October 28, 1965, the West Coast leaders of the Student Nonviolent Coordinating Committee (S.N.C.C.), a Far Left “Civil Rights” group which counts among its members some of the top young Communists in the nation, met in Fresno, California.

The principal speaker was Cesar Chávez…

And so when Obama says that Chavez’ movement “was sustained by a generation of organizers who stood up and spoke out and urged others to do the same.” we know that Obama wishes to memorialize not only Chavez but his communist friends and revolutionaries as well.

Communism Obama Saul Alinsky Socialism
This entry was posted on Saturday, October 13th, 2012 at 9:36 am and is filed under History, Politics. You can follow any responses to this entry through the RSS 2.0 feed. You can leave a response, or trackback from your own site.
Many of the articles on Light from the Right first appeared on either The New American or the McAlvany Intelligence Advisor.