Federal Reserve Board Chairman Ben Bernanke attempted Monday to answer some of the fierce criticism and public unease facing the Fed’s third round of bond purchases, known as quantitative easing or QE3. 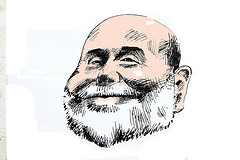 This article from MarketWatch is one of the more incredible expositories on the Fed’s negligence and back-pedaling that I’ve seen. Bernanke is, to put it simply, in panic mode. The crowd is seeing that the king is naked and he has to cover his nakedness with words and reassurances. Which makes the crowd more nervous and more skeptical and noisy. It’s an amazing show.

What is his strategy? To do more of the same – do more of what hasn’t worked! That’s the ticket! If he can just get interest rates lower, people will start to borrow again:

In a speech to the Economic Club of Indiana in Indianapolis, Bernanke tried to de-mystify the purchases, saying the basic monetary policy strategy “is the same as it has always been.”

This will, of course, give confidence to those hiding in the bushes to come out, start borrowing and spending, and get the economy moving again.

The false assumption is that consumption drives the economy is at bottom exactly what is wrong with Fed policy. It isn’t consumption, it’s production. One produces in order to consume.

Bernanke continues to make a fool of himself:

We hope that, by clarifying our expectations about future policy, we can provide individuals, families, businesses, and financial markets greater confidence about the Fed’s commitment to promoting a sustainable recovery and that, as a result, they will become more willing to invest, hire and spend.

He also tried, and failed, to answer charges that he is setting the stage for price inflation at the retail level, and that he is letting Congress off the hook by allowing them to continue to spend money borrowed at below-market interest rates.

But we’re not at all like Japan, he says, which is still suffering from a decades-long recession:

[It] has been important [in] getting to your banking system and recapitalizing it and getting it back into operation as soon as possible.

The Japanese took a while to do that and for a time their banks were not extending credit for a number of years.

They still aren’t. And neither are ours.

Bernanke has been flushed out from behind the granite walls of the Fed and is being forced to defend his nakedness, with no success.

Banking Ben Bernanke Economy Federal Reserve Inflation Interest Rates Monetary Policy Quantitative Easing
This entry was posted on Saturday, October 13th, 2012 at 11:00 am and is filed under Economics. You can follow any responses to this entry through the RSS 2.0 feed. Both comments and pings are currently closed.
Many of the articles on Light from the Right first appeared on either The New American or the McAlvany Intelligence Advisor.