Obama Moving to Hawaii if He Loses 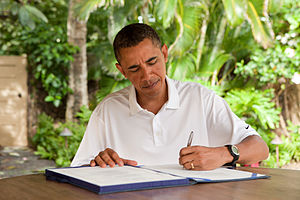 According to World News Daily Obama has real estate agents working on a $35 million property in the “high rent” district in Kailua, the Beverly Hills section of Hawaii. And author Corsi thinks it’s because Obama expects to lose in November:

Very quietly, Obama’s chief financier, Penny Pritzker, has entered the Hawaii housing market to buy a retirement home for the president and his family that will be available not in 2016, but in January 2013, according to a confidential source within Pritzker’s Chicago organization.

Pritzker is a rich liberal, heiress to the Hyatt Hotels fortune, and she’s having trouble with big Democrat donors this time around:

The source further told WND that Pritzker is experiencing frustration in her fundraising efforts, as wealthy donors who contributed generously to Obama in 2008 are not even returning her phone calls.

She thinks Obama is going to lose the election:

The source told WND that highly confidential internal polls conducted by the Obama campaign indicate Obama cannot win re-election, despite public surveys that show him in the lead.

“The public polls are mostly political,” the source argued. “Obama radicals want Romney supporters to feel discouraged and give up. Truth is that Romney’s winning.”

Apparently she is offering a little quid-pro-quo to the donors who step to the plate:

“Everything is for sale. Ambassadorships, government grants, stimulus money – you name it,” the source told WND.

“There’s nearly three months between the Nov. 6 election and the Jan. 20 inauguration – plenty of time to hand out goodies to friends from the Oval Office.”

They’re speeding up the search, and may have found a “suitable” property for the King and Queen and Princesses:

Kevin DuJan, founder and editor of HillBuzz.org, first reported Pritzker was acting as a proxy to purchase a $35 million oceanfront estate in Kailua, the “Beverly Hills of Hawaii,” on the northeast shore of the island of Oahu…

The property that appears to fit the description is an estate seen in a recent episode of the popular television show “Hawaii Five-O.”

As featured recently in Honolulu Magazine, the property consists of a main residence and a guest home located on 1.5 acres in an area called “Beachfront,” just before the Lanikai neighborhood in Kailua on Oahu’s Windward Coast.

Even Michelle’s mom is looking forward to the move:

DuJan at HillBuzz.org has been reporting that Michelle Obama’s mother, Marian Robinson, who is currently living with the Obama family in the White House, has been bragging about moving to Hawaii.

“It was fun while it lasted,” HillBuzz.org quotes Robinson as saying, “but wait until you see the place they’re buying for Michelle and Barack!”

The Obamas are looking for people to help them pack. I’m thinking of volunteering.

2012 Elections Democrat Housing Market Mitt Romney Obama Polls Real Estate Retirement
This entry was posted on Friday, October 12th, 2012 at 3:36 pm and is filed under Politics. You can follow any responses to this entry through the RSS 2.0 feed. Both comments and pings are currently closed.
Many of the articles on Light from the Right first appeared on either The New American or the McAlvany Intelligence Advisor.