Medicaid Fraud in the Billions 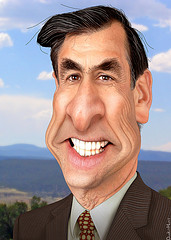 The response to the admission by Deputy Director for the Centers for Medicare and Medicaid Services, Penny Thompson, made in September before the House Oversight and Government Reform Committee and chaired by Rep. Darrell Issa (R-Calif.), that payments made by the federal government to New York’s state-run development centers were “excessive and unacceptable,” was simple and to the point: those overpayments were “inexcusable” and “exceeded the entire Medicaid budgets of 14 states” and added that “the failure … suggests an institutional failure and a pattern of irresponsible actions that have cost the taxpayers billions.”

The amount, just in New York, is estimated by Issa’s committee to be in excess of $15 billion, equivalent to $1.9 million per patient per year!

Using the bureaucratic shuffle which Thompson has no doubt refined in her 20 years as a top-level bureaucrat for Medicare and Medicaid, she admitted:

Simply put, bureaucrats in New York have been milking the system for decades, but Thompson claims she just found about it a few months ago. Here’s more from her report to Issa’s committee:

CMS did not begin working with New York to address the situation fully until 2010. Since then, CMS has been working with the State to understand the circumstances around the inflated rate and more fully address this problem.

The problem began back in 1994 when New York State set up the reimbursement rules, with the approval of Thompson’s agency. But there were enough loopholes and undefined parameters to drive a 100-passenger train through, and sure enough, New York took maximum advantage of them. Concluded Thompson:

Issa’s committee was aware that there was massive fraud taking place in the Medicaid program, a federal program financed with taxpayer monies but run by the states. Back in April his staff prepared a report entitled “Uncovering Waste, Fraud and Abuse in the Medicaid Program” which examined three cases of such fraud, New York being just one of them. The numbers are incomprehensibly large:

James Mehmet, a former chief state investigator of Medicaid fraud and abuse in New York City, believes that at least 10% of Medicaid dollars are lost on fraudulent claims, while another 20% to 30% consist of abuse, or services that were delivered but that were unnecessary.

Unfortunately, these three cases demonstrate just a tiny fraction of the instances where daily occurrences of Medicaid waste, fraud, and abuse occur…

In May the Office of Inspector General for the Department of Health and Human Services explained how the scam worked in New York:

Total reimbursable operating costs do not reflect the State’s actual costs. The rate-setting reimbursement methodology for the developmental centers was originally approved in January 1986, retroactive to April 1984.

And as the scam developed over time, additional changes favoring increased reimbursement demands from the state were developed, and approved, by Thompson’s agency:

Since then, the State has received CMS approval for more than 35 State plan amendments related to this methodology…

Specifically, the growth of the daily Medicaid reimbursement rate for the developmental centers has significantly outpaced those of both State-operated and privately operated ICFs—from $195 per day in SFY 1985 to $4,116 per day in SFY 2009, which is the equivalent of $1.5 million per year for one Medicaid beneficiary. This rate is more than nine times the average rate for all other ICFs for the same period. (emphasis added)

This kind of fraud has been rampant for years, but most of the blame for such “fraud, abuse and waste” has been blamed on everyone BUT the states’ Medicaid administrators. David Murphy, a fraud specialist and professor at Lynchburg College in Virginia, noted in July that everyone had his hand in the honey pot – everyone except the agencies themselves. Fraud involved:

Not one word about the agencies involved, however. Said Murphy, “Medical fraud is committed everywhere, by just about everyone.”

Lawrence Huntoon, MD, a board-certified neurologist from Buffalo, New York, and Editor-in-Chief of the Journal of American Physicians and Surgeons, reviewed the statement made by Thompson and concluded:

Now we have indisputable evidence that government itself is a major source of fraud in government-run medical programs.

Darrell Issa Federal Government Fraud HHS Medicaid Medicare Scandal
This entry was posted on Friday, October 12th, 2012 at 6:09 am and is filed under Constitution, Economics, Politics. You can follow any responses to this entry through the RSS 2.0 feed. Both comments and pings are currently closed.
Many of the articles on Light from the Right first appeared on either The New American or the McAlvany Intelligence Advisor.