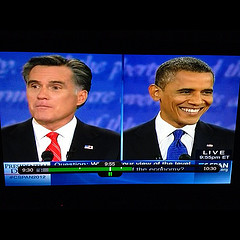 Rasmussen just posted its latest poll based on a three-day rolling average. It shows Romney ahead of Obama by 2 percentage points:

The results are based upon nightly interviews and reported on a three-day rolling average basis. As a result, Sunday’s update was the first based entirely upon interviews conducted after the first presidential debate last Wednesday night.

I have seen persuasive evidence that Rasmussen gets closer to the real world than any other pollster. But they issued a caveat:

The numbers reflect a modest debate bounce for Romney. As with all bounces, it remains to be seen whether it is a temporary blip or signals a lasting change in the race…

So the jury is still out. And a 2 percent difference is well within statistical noise.

But there’s another poll that Rasmussen publishes that also sheds a little light on the matter: the president’s job approval rating:

I don’t know if this is helpful to you. It confirms that the race is going to be close. But I watch Rasmussen and put more credence in their polls than any other:

In 2004, Rasmussen Reports was the only firm to project the vote totals for both candidates within half a percentage point.

2012 Elections John McCain Mitt Romney Obama Polls Rasmussen
This entry was posted on Thursday, October 11th, 2012 at 11:00 am and is filed under Politics. You can follow any responses to this entry through the RSS 2.0 feed. Both comments and pings are currently closed.
Many of the articles on Light from the Right first appeared on either The New American or the McAlvany Intelligence Advisor.