Obama Lost the Debate Because He Just “Showed Up” 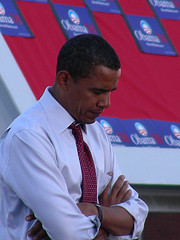 This is a brutal yet accurate assessment of what happened at the debate: Obama was out of answers.

This was the first debate in which Obama has had a record to defend. In 2000, he ran for Congress in a primary race against [communist Black Panther] Bobby Rush and attacked the incumbent. In 2004, he ran successfully for the U.S. Senate, offering all sorts of promises — but never ran for re-election on their fulfillment.

In 2008, a blank-slate Obama ran for president and won by lumping in challenger John McCain with unpopular incumbent president George W. Bush — while offering [communist slogans] like “hope and change” and “yes, we can!”

Victor Davis Hanson is right on the button. When confronted with irrefutable facts, Obama folds like a cheap suit:

The debate with Romney, however, marked the first time in his national political life that Obama has had the harder task of defending a record of governance. That he could not make the case onstage for a successful four years suggests either that his record is nearly indefensible — 42 months of unemployment above 8 percent, more than $5 trillion in new debt, record numbers of Americans on food stamps, anemic economic growth — or that Obama believes voters don’t care that much…

Barack Obama has always felt that it was enough to show up rather than to achieve. We all know that he got into Occidental College and Columbia University, was Law Review editor at Harvard, was offered a professorship at the University of Chicago Law School, and was elected senator and president. But we rarely heard of a significant record of actual achievement as a student, academic or legislator…

This is the mark of Obama: “just showing up” is enough to win. As Hanson says:

Obama’s handlers know all this. No wonder what worries them is not that Obama was off his game against Romney, but that the game itself — not Obama — has suddenly changed.

The game is the facts. Facts don’t lie. Obama can’t explain them away. Just showing up won’t cut it any more.

2012 Elections George W. Bush John McCain Mitt Romney Obama Unemployment
This entry was posted on Thursday, October 11th, 2012 at 3:30 pm and is filed under Politics. You can follow any responses to this entry through the RSS 2.0 feed. Both comments and pings are currently closed.
Many of the articles on Light from the Right first appeared on either The New American or the McAlvany Intelligence Advisor.