Will Romney Win My Vote? 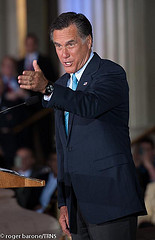 Mike Adams thinks Romney is a better choice than Obama. He’s entitled to his opinion:

My vote was changed from “going-to-sit-this-one-out” to Romney. But it did not take a 90-minute debate to do it. It only took one line. He didn’t have me at “hello.” He got me when he scolded a boyish eye-contact-avoiding president for over-spending. Specifically, he got me when he looked right at Obama and characterized the current spending problem as “immoral.”

Of course “overspending” is “immoral.” It implies that you’re spending money you don’t have and that you borrowed it or created it or stole it from someone else. What annoys me about Adams is his unwillingness to mention the Constitution. I don’t mean to sound like a broken record here, but I am annoyed at his facile unwillingness to note that all these questions about “proper” and “improper” spending have nearly all been answered years ago – 225 years ago, to be exact.

Adams thinks it has something to do with the Greatest Generation somehow:

Our nation is rooted in a deep tradition of respect for property rights. It is a tradition that was well understood until the Greatest Generation gave birth to the Gratest Generation (mis-spelling intentional) – a generation that now controls our nation’s purse strings. That generation has turned its back on core principles expressed by our Founders. In the process, it has jeopardized the existence of the republic.

He’s getting closer!  Will he actually mention the Constitution and its built-in limitations?

This is a good point. But it still sidesteps the primary issue: candidates for public office, including especially Romney, don’t talk about the Constitution. Perhaps it’s because the Tea Party has educated a lot of people about the Constitution and he doesn’t want to appear sympathetic to their point of view, or even admit that they are a force – an increasing force – for limited government based on it.

2012 Elections Mitt Romney Obama Spending Tea Party
This entry was posted on Wednesday, October 10th, 2012 at 9:03 am and is filed under Constitution, Politics. You can follow any responses to this entry through the RSS 2.0 feed. Both comments and pings are currently closed.
Many of the articles on Light from the Right first appeared on either The New American or the McAlvany Intelligence Advisor.