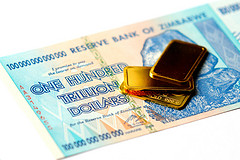 It does not, however, provide any insight whatsoever into that most elusive point: the “trigger” that unleashes the hyperinflation. What is it that causes people suddenly, sometimes overnight it seems, to decide that their money is worthless and that they need to get rid of it as quickly as possible before it loses any more value?

But the study, and the table of the 56 episodes (some very recent and nearby), is instructive.

First, their work may be considered to be more reliable than some other more readily available sources, like Wikipedia:

Second, they had considerably difficulty in obtaining reliable data. How, for example, do you measure inflation when prices in grocery stores are being changed hourly?

Third, some of the episodes were simply beyond comprehension:

So they had to come up with another way of looking at it: how long did it take for prices to double? Let’s take a few examples from their table, and you’ll see what I mean:

For most people, the runaway inflation in Germany at the end of the First World War is the one they have read the most about. According to the study, that hyperinflation (defined as a price level increase of at least 50% a month) lasted for just one month: January 1920. Of course, most historians point out that Germans suffered under awful inflation prior to and after that month. But during that month, inflation raged at the rate of 56.9% a month, which meant that prices were increasing by about 1.5% every day, doubling every 47 days.

Brazil had hyperinflation from December 1989 through March 1990, with prices increasing by 2 percent every day, and doubling every 35 days.

Argentina suffered hyperinflation from May 1989 through March 1990, with prices increasing by 3.7 percent every day, and doubling every 19 days.

Nicaragua had hyperinflation from June 1986 through March 1991 (an amazing five years!) with prices increasing by 4.4 percent every day, and doubling every 16 days.

The big mack-daddy of all, surprisingly (to me, at least), was Hungary. From August 1945 through July 1946 prices there rose by 207 percent every day, doubling every fifteen hours!

I’m sorry I can’t be more helpful about that “trigger” mechanism. I’m still looking. In the meantime, I remain persuaded that hyperinflation in the US is highly unlikely. Instead, it’ll be like a slowly growing cancer, eating away at the purchasing power of our money incrementally, just like it has been since the Fed started operating in 1914, and especially since Nixon broke the link between the dollar and gold in 1971.

Federal Reserve Germany Gold Standard Inflation War
This entry was posted on Wednesday, October 10th, 2012 at 11:54 am and is filed under Economics. You can follow any responses to this entry through the RSS 2.0 feed. Both comments and pings are currently closed.
Many of the articles on Light from the Right first appeared on either The New American or the McAlvany Intelligence Advisor.