Finally, Some Sense About Voting for the Lesser of Two Evils 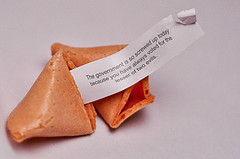 Ron Holland was interviewed by Anthony Wile of the Daily Bell a while back and I was impressed with it. He’s solid, a sound thinker, and not afraid to go against the grain.

He thinks voting for Romney as the lesser of two evils is morally wrong:

Had the Romney Campaign held in check the Republican Party leadership’s goon squad that made a mockery of the democratic process in the Republican Party primaries and caucuses as well as the national GOP convention, Romney might have captured 50 percent or more of Ron Paul voters and supporters, even without a Paul on the ticket. But he didn’t and actions always have consequences.

Certainly as the better of the two candidates, I did consider voting for Mitt Romney before watching the GOP convention and the establishment brownshirt tactics that sickened me regarding the Republican Party. While I certainly prefer Romney to Obama, the truth of the matter is both the GOP and Democrat Party are equally evil in their goals, their major policies and how they will carry out power elite directives and governance.

There are lots of reasons not to like Romney. I’ve written about some of them for The New American magazine, and some I’ve just stored away in my memory bank to access, if necessary, in the future. For Holland, the treatment of Ron Paul’s delegates by the RNC is enough:

There is no lesser of two evils when considering the two major political parties in the United States today. I  consider non-voting, voting third party or even voting for the opposition to be justified now, considering how the GOP leadership treated the Ron Paul Campaign, the liberty movement and our primary voters.

Adding a little support for that idea from Jesus, the Creator of the universe, was a nice touch, and a good reminder:

I think Jesus said it best: “And then will I profess unto them, I never knew you: depart from me, ye that work iniquity.” ~ Matthew 7:23

2012 Elections Democrat Elite Establishment John Birch Society Liberty Mitt Romney Obama Republican Ron Paul Tea Party The New American
This entry was posted on Monday, October 8th, 2012 at 1:27 pm and is filed under Politics, Religion. You can follow any responses to this entry through the RSS 2.0 feed. Both comments and pings are currently closed.
Many of the articles on Light from the Right first appeared on either The New American or the McAlvany Intelligence Advisor.