Many of Barack Obama’s actions as president of the United States reflect neither political expediency nor an attempt to promote the best interests of the American people. Take, for example, his bowing low from the waist to foreign leaders.

No president of the United States had ever done that before. It gained Obama nothing with the voters, nor was there any reason to think that he expected it to. Why then did he do it? What did it accomplish?

It brought the United States down a peg, in the eyes of the world, something that he has sought to do in many other ways. 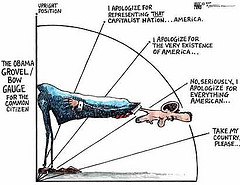 My editor at The New American has tasked me with writing about “What Makes Obama Tick” and Sowell nails it, based on the research I’ve already done: He intends seriously and permanently to weaken the US so that it may be more comfortably merged into the New World Order.

Now Sowell doesn’t say that last part in so many words. I added that. But that’s where we’re headed. Sowell’s examples are sufficient:

These bows were perfectly consistent with his view of a maldistribution of power and prestige internationally, just as his domestic agenda reflects a felt need for a redistribution of wealth and power within American society.

To Obama, the capitalist system is the enemy and must be destroyed and replaced with a totalitarian one. It’s as simple, unfortunately, as that. Sowell adds:

It is not just the United States, but the Western world in general, including Israel, that needs to be brought down a peg, from the standpoint of the ideology prevalent among the people with whom Barack Obama has allied himself consistently for decades. (My emphasis)

It’s his ideology, adopted from his mentors and peers over the years, that tells us where he wants the US to go. My article will explore, in highly condensed form (I’m only allowed 3,000 words and believe me, I’ll need to use every one of them!), those mentors and peers, most of whom are unknown even to students of the man and his background.

Stay tuned. That article should be ready in a few days, and I’ll ask Teddy (my web guy) to publish it here.

John Birch Society Obama The New American
This entry was posted on Wednesday, October 3rd, 2012 at 9:48 am and is filed under Foreign Policy, Politics. You can follow any responses to this entry through the RSS 2.0 feed. Both comments and pings are currently closed.
Many of the articles on Light from the Right first appeared on either The New American or the McAlvany Intelligence Advisor.