Presidential Debate Questions from Light from the Right

George Will – Debate questions for the presidential candidates

The spectacles we persist in dignifying as presidential “debates” — two-minute regurgitations of rehearsed responses — often subtract from the nation’s understanding. But beginning Wednesday, these less-than-Lincoln-Douglas episodes might be edifying if the candidates could be inveigled into plowing fresh ground. 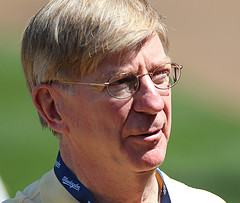 Will has some suggestions for Presidential Debate questions for Obama and Romney. And so do I. Here is one from Will on the Supreme Court:

Do you rejectthe Kelo v. New London decision, in which the Supreme Court deferred to governments’ desire to seize private property and give it to wealthier private interests who would pay higher taxes?

Do you support the Supreme Court’s decision to uphold Obamacare on the basis that a tax – any tax – is ok as long as Congress intended it to be a tax?

On Oct. 7, we begin the 12th year of the war in Afghanistan, and 51 recent NATO fatalities have been at the hands of our supposed Afghan allies, causing U.S. commanders to indefinitely suspend many joint operations. Why are we staying there 27 more months?

I have a better one (or three):

Why are we there in the first place? What is your take on the War on Terror, which is a war against a strategy and not a war against an aggressor? And why didn’t Congress get involved in declaring war, as the Constitution demands?

Do you agree that a financial institution that is too big to fail is too big to exist? If not, why not? The biggest banks emerged from the Great Recession bigger. At the end of 2011, the five biggest (JPMorgan, Bank of America, Citigroup, Wells Fargo and Goldman Sachs) held more than $8.5 trillion in assets, which is 56 percent of the 2011 gross domestic product. Why should they not be broken up?

Since the Federal Reserve is essentially a cartel designed from its beginning to protect big banks from the consequences of their own folly, why shouldn’t the Fed be abolished?

I won’t be holding my breath Wednesday night to see if any of mine make it.

2012 Elections Cartel Federal Reserve Great Recession Mainstream Media Media Bias Mitt Romney Obama Obamacare Private Property Recession Supreme Court Too Big To Fail War Wells Fargo
This entry was posted on Wednesday, October 3rd, 2012 at 1:28 pm and is filed under Politics. You can follow any responses to this entry through the RSS 2.0 feed. Both comments and pings are currently closed.
Many of the articles on Light from the Right first appeared on either The New American or the McAlvany Intelligence Advisor.