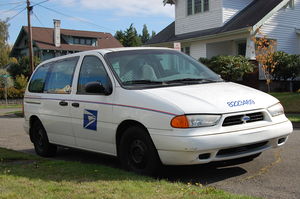 With the announcement that the U.S. Postal Service will be unable to make a $5.6 billion payment to its employees’ health benefit plan due on September 30th, calls for privatization of the archaic service are mounting.

The service already failed to make last year’s payment of $5.5 billion which Congress had allowed to be delayed until August 1st. And it’s no wonder that the service can’t make those payments: it lost $5.2 billion in the third quarter this year, up from a loss of $2.1 billion a year ago. Estimates are that the service will lose at least $10 billion this year without counting the default of $11 billion in payments to its benefit plan.

USPS spokesman David Partenheimer thinks the service can still be salvaged through “comprehensive reform” of the laws that govern the service. He said:

They are urgently needed in order for the Postal Service to fully implement its five-year business plan and return to long-term financial stability.

Missing from his statement was any mention of profitability, just “financial stability.” And that is the key to its future, if it is to have one. Last year Jacob Huebert weighed in at Mises.org, saying that the idea that reforming the service …

seems to reflect the idea that government could be efficient if only it were “run like a business” — just cut some expenses, increase some revenue, and all would be well…

Any attempt to run a governmental organization as though it were a private business will fail because the organization still will not be able to engage in economic calculation and still will not be able to operate on a meaningful profit-and-loss basis as private businesses do. Postal workers and managers will still be focused on how to comply with bureaucratic rules, not on how to make money.

The Senate passed a bill that would allow the Postal Service to lay off some of its employees but made it much more difficult to close down the 3,700 post offices that lose money or to drop Saturday deliveries. And the savings are expected to be less than $500 million, a rounding error. A House bill proposed by Rep. Darrell Issa (R-Calif.) to allow it to make more substantial changes failed to gain traction, most likely because it’s an election year, and it was easier to punt this into November or December.

The underlying problem is the monopoly granted to the service by Congress. For years the Postal Service has charged above-market rates to deliver first class mail, which subsidized the mail going to “the last mile” of customers where delivery costs are much higher. But that monopoly privilege has been eaten away by the huge reduction in first class mail thanks to the increased use of the Internet. Increased competition by UPS and FedEx has also encroached onto the Postal Service’s turf.

In addition, Postal Service customers can see what’s happening and are making other arrangements for their advertising dollars, moving away from junk mail entirely, or using local delivery services instead. The result is the inevitable shrinkage of the Postal Service, way beyond what internal “reforms” may be proposed.

Back in 1995 Postmaster General Marvin Runyon waxed eloquently about reforms taking place under his watch:

The Postal Service is also more businesslike than ever. We got a good start 25 years ago, when the Postal Reorganization Act combined our mission to serve everyone, everywhere, every day, with a mandate to operate like a business. And we’ve delivered.

We’ve become more businesslike as the act envisioned. Political affiliations no longer determine who gets what jobs. Postal management, with help from a board of directors similar to ones in the private sector, determines our strategic directions and capital investments. And we’re self- supporting.

But that was then. This is now. If such reforms had worked, they would have. Runyon is gone and the deficits remain, increasing in size to the tune of $25 million every day.

Peter Farrara noted at the same time that by removing the monopoly privilege from the service and allowing it to compete freely was the only thing that would save it from extinction. If it were sold, or privatized,

the new Postal Service [would likely become] the largest private mail delivery firm by far. Without a guaranteed market that it can retreat to, it [would] undoubtedly charge back into package and overnight mail delivery in a rigorous and highly competitive way, winning a substantial market share. And it probably will go beyond that, exploiting its comparative advantages.

One of those advantages is that the Postal Service is America’s biggest landlord, with 40,000 properties nationwide. With new market incentives, the new service will move rigorously to put those properties to best use.

Some can be sold at great profit, having been purchased for relatively little many years ago. Others can be rented out for maximum use. But probably the greatest potential is to rent out space in every postal facility to complementary vendors — selling packaging and envelopes, copying services, printing, faxes, even letter stuffing…

And that doesn’t even begin to explore what complementary services can be offered on the delivery side of the business. What else can mail carriers do while they are delivering the mail? Can they deliver other goods and services? Can they carry advertising on their trucks? Can stamps carry advertising messages?

Not today. Not in today’s regulatory environment. And not with Congress’ continued unwillingness to face the issue square on. Postal service privatization is working in Finland, Sweden, Germany, Switzerland and Austria, why not here? As Huebert said:

The only “reform” that can “fix” this is genuine privatization — that is, taking away the postal service’s monopoly privileges and subsidies and forcing it either to make a profit or go out of business.

That day of reckoning is closer than many think: the Postal Service is expected to run out of operating funds by the end of October, which will force Congress to do something before the election instead of punting the issue into November.

Darrell Issa Jobs Monopoly Post Office Private Sector Senate Subsidies Unions USPS
This entry was posted on Wednesday, October 3rd, 2012 at 6:37 am and is filed under Constitution, Economics, Politics. You can follow any responses to this entry through the RSS 2.0 feed. Both comments and pings are currently closed.
Many of the articles on Light from the Right first appeared on either The New American or the McAlvany Intelligence Advisor.