National Review Doesn’t Speak For Me

Ask most Americans about the big-spending government policies of the last few years, and they will tell you the programs have failed. In a February 2012 poll from the nonpartisan Pew Research Center, 66 percent of Americans said the federal government is having a negative impact on the way things are going in this country (versus 22 percent who say the impact is positive). A majority disapproves of the president’s 2009 stimulus, and according to a 2010 CNN poll, about three-quarters of Americans believe the money was mostly wasted. 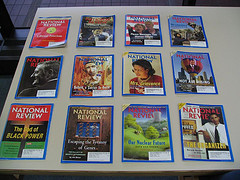 This, I agree with. I’m glad to see, according to the polls at least, that more and more Americans also agree: government stimuli didn’t stimulate.

What I disagree with is Brooks’ contention buried later on in the article about conservatives (I generally consider myself one, if defined properly) and safety nets:

Conservatives today understand the importance of a reliable safety net for the truly indigent and the necessity of dealing with certain market failures.

Further, there is universal support on the political right for opportunity-equalizing government policies, such as publicly funded education (ideally, administered for the benefit of children as opposed to rent-seeking bureaucrats and teachers’ unions).

Wow! I didn’t realize that I believed in and supported all these things! But this is National Review, the supposedly “conservative” voice of reason in today’s world.

The most reliable safety net in the world is…are you ready…the family. That’s why socialists the world over consider the family as the enemy of the state: everyone must be dependent on the state or else their socialist plans fail.

And “universal support” for “publicly funded education?” All I see is that the more that is spent by governments on such education is lower scores and more acceptance of big government on the part of the kids.

So somewhere along the way I got off the bus on “conservatism,” at least the style supported by National Review.

Education Entitlements Federal Government Keynesian Polls Stimulus Bill Unions
This entry was posted on Wednesday, October 3rd, 2012 at 11:55 am and is filed under Constitution, Economics, Politics. You can follow any responses to this entry through the RSS 2.0 feed. Both comments and pings are currently closed.
Many of the articles on Light from the Right first appeared on either The New American or the McAlvany Intelligence Advisor.