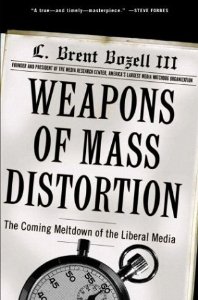 Twenty-five years ago this coming Monday, October 1, Brent Bozell founded the Media Research Center (MRC) with a little help from some friends, a little money, a black and white television set, and a leased computer. Today, one wouldn’t recognize his operation, with an annual budget of $10 million and 60 journalists seeking and finding media bias in every nook and cranny of the mainstream media’s world.

They’re finding much to write about. Bozell himself has written three books, including Weapons of Mass Distortion, and writes two weekly blog posts. His empire has grown to include the News Analysis Division dedicated to “documenting, exposing and neutralizing liberal media bias,” the Business & Media Institute working to advance “the culture of free enterprise in America,” the Culture and Media Institute which concentrates on “correcting misconceptions in the media about social conservatism and religious faith,” along with the Cybercast News Service—better known as CNSNews.com—concentrating on providing online news on current events “as it should be reported: accurate, balanced and unfiltered.”

MRC has over 300,000 subscribers to its six electronic newsletters which include a bi-weekly compilation of some of the more outrageous quotes from members of the liberal media, a summary of mistakes and deliberate misinformation published in the New York Times, along with publishing relevant and timely events that the mainstream media has missed altogether.

One newsletter, NewsBusters, delights in finding faux pas, rampant silliness, and deliberate distortions and then publishing them. For instance, the worst bias in 2012 (so far!) includes Newsweek magazine that sees Barack Obama as “grotesquely underappreciated” and a former CNN correspondent who charged Republicans with trying to return the country “to the good old days of Jim Crow.”

For 2011, NewsBusters’  lead-off bias was economist Paul Krugman’s careless comment about the 10th anniversary of 9/11, calling it “an occasion for shame,” while in 2010 it pointed to mainstream journalists who attacked members of the Tea Party, calling them “Nazi goons” and their likening of Arizona’s attempts to protect its borders from illegals to “the Nazi occupation of Denmark.”

MRC caught the media fawning over the arrival from obscurity of the junior Senator from Illinois in 2009, with ABC’s Terry Moran suggesting that he was the “first President since George Washington to be taking a step down into the Oval Office,” only to be outdone by Newsweek magazine’s Evan Thomas seeing Obama as “above the world … he’s sort of God.”

One of the most highly popularized gushings of delight over Obama’s arrival came from Chris Matthews in 2008, who won MRC’s award for his tingle: “I felt this thrill going up my leg. I mean, I don’t have that too often.”

In August, 2008, as the presidential campaign was capturing the media’s attention, MRC exposed the media’s bias with a study that showed that, from May 2000 (the first mention of Barack Obama) through the Democratic primaries in June 2008, 34 percent of the stories about Obama were positive, with just 5 percent negative. The study further showed that when focused on the big three media, ABC, CBS and NBC, the bias in favor was even greater: 42 percent were positive, with just 7 percent negative. The MRC said:

The Big Three broadcast networks have showered Obama with positive — even glowing — news coverage, protected the candidate from the attacks of his rivals, and showed little interest in investigating past associations or exploring the controversies that could have threatened his campaign.

Perhaps the most outrageous exposure of bias by MRC was recalled by Erick Erickson, editor at RedState.com, about a story appearing in the New York Times written by Andrew Rosenthal concerning President George Bush’s surprise at the sophistication of a common checkout scanner at a supermarket. Wrote Erickson:

There’s just one problem — the story was a complete and utter fabrication. Andrew Rosenthal was not there, did not see it, and based it off a pool report that never actually claimed what Andrew Rosenthal claimed…

Andrew Rosenthal is now the editor of the New York Times editorial page.

As Erickson noted: “25 years ago, the Media Research Center started shedding the spotlight on the media’s bias. Today, the overwhelming majority of Americans agree with them.”

The impact MRC has had on changing the attitude towards the mainstream media is enormous. Investment analyst Doug Casey noted this indirectly in an interview with Louis James of International Speculator:

Because people increasingly realize that 80% of everything [in the mainstream media] is [not to be trusted], they’re becoming ever more discriminating — which is a very good thing. People used to slavishly believe everything in the newspapers just because it was written; now they’re necessarily more skeptical, which means they’re forced to be more thoughtful.

Congratulations to MRC for a successful first 25 years. But your work is not done. Indeed, it is just beginning.

Democrat Elite Establishment Liberal Mainstream Media Media Bias National Socialism Obama Republican
This entry was posted on Tuesday, October 2nd, 2012 at 7:35 am and is filed under Politics. You can follow any responses to this entry through the RSS 2.0 feed. Both comments and pings are currently closed.
Many of the articles on Light from the Right first appeared on either The New American or the McAlvany Intelligence Advisor.