I’ve pulled evidence from IRS publications to show that rich people paid a lot more to Uncle Sam after Reagan reduced the top tax rate from 70 percent to 28 percent. 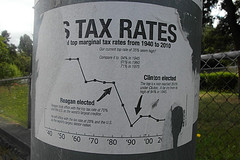 Dan Mitchell works at Cato, one of my favorite think tanks. And he has long promoted the idea that if you tax something more, you get less of it, and vice versa. Especially vice versa: if you allow people to keep more of what they earn, they’ll earn even more…and pay more in taxes.

Now that’s no reason to reduce tax rates: to get more income to the government. Reducing tax rates should be done for moral reasons: allowing people to keep what they earn.

Mitchell quotes a writer at the Telegraph, a London paper equivalent perhaps to the Washington Post:

During the 1970s, when the tax system specialized in inflicting pain, the top one per cent of earners contributed 11pc of income tax. By 1986-87, with the top rate down to 60pc, that had increased to 14pc.

This falls into the “Well, duh!” category for me. It’s a brief explanation of the Laffer Curve which Wikipedia explains:

The Telegraph article explains what happens when tax rates are increased:

Luxury homes transactions are falling because of higher stamp duty. Britain is now a high tax economy; this is distorting work and investment decisions, gradually shifting talent and capital overseas.

The overwhelming majority of high earners are already contributing disproportionately to the exchequer; tightening the screws further will be disastrously counter-productive.

The lesson of the past 30 years is clear: the best way to entice the rich to pay even more tax is to keep rates low and allow them to get even richer.

Ah, but such a move is counter to the prevailing ideology in the Obama administration. Wealth doesn’t belong to individuals, it belongs to the state which, by its grace, allowed such wealth to be created in the first place. So it’s government’s job to redistribute its wealth into the places where, in its infinite hubris, it’ll do the most good.

That’s why we don’t hear much about the Laffer Curve here.

IRS Obama Taxes
This entry was posted on Tuesday, October 2nd, 2012 at 3:42 pm and is filed under Economics, Politics. You can follow any responses to this entry through the RSS 2.0 feed. Both comments and pings are currently closed.
Many of the articles on Light from the Right first appeared on either The New American or the McAlvany Intelligence Advisor.