CATO – The Fed’s New Round of Quantitative Easing

By introducing another program to buy MBSs [mortgage-backed securities], to the tune of $40 billion per month, the FOMC [Federal Open Market Committee, headed by Fed Chairman Bernanke] is supporting the long-standing federal policy of special aid to housing, real estate and mortgage interests. 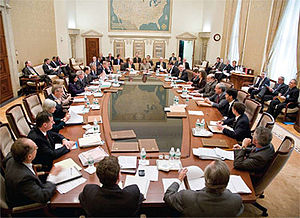 My, my, the landscape does look a little different from the outside, doesn’t it, Mr. Poole?

He started his career in government by working for the Federal Reserve’s Board of Governors from 1964 to 1974. Then he joined the faculty at Brown University, chairing the economics department there.

Somewhere along the way he got religion. I have great respect for Cato and they wouldn’t hire a fool. Nor would they bring in a Keynesian to undermine their efforts to expose that fraud unless he was an escapee from the reservation.

But listen to what Poole said:

The Federal Reserve says that it is apolitical but this decision is directly supportive of continuation of the current status of Fannie Mae and Freddie Mac. This action is not monetary policy but fiscal policy, extending credit to a favored industry. This policy is crony capitalism, whether practiced by the federal government or by the Federal Reserve.

This is perfect: “crony capitalism” – “extending credit to a favored industry” – “not monetary policy but fiscal policy.” Amazing!

My questions for Mr. Poole: how long did it take you to overcome your Keynesian mindset and enter the real world? Are you a “recovering Keynesian?” Are you just an opportunist? When and how did you see the light? Is there hope for others still on the reservation?

Fannie Mae Federal Government Federal Reserve Fraud Keynesian Monetary Policy Real Estate
This entry was posted on Monday, October 1st, 2012 at 3:14 pm and is filed under Economics, Politics. You can follow any responses to this entry through the RSS 2.0 feed. Both comments and pings are currently closed.
Many of the articles on Light from the Right first appeared on either The New American or the McAlvany Intelligence Advisor.