NYT – U.S. to File W.T.O. Case Against China Over Cars

The Obama administration plans to file a broad trade case at the World Trade Organization in Geneva on Monday accusing China of unfairly subsidizing its exports of autos and auto parts, a senior administration official said late Sunday, in a move with clear political implications for the presidential elections less than two months away. 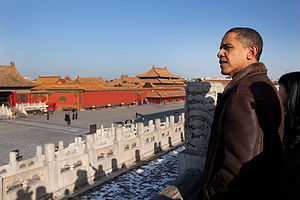 Why would Obama do that? The US government owes China more than $1.2 trillion and one would think we should treat them nicely. But no. Instead, Obama is filing suit against them for “unfair” trade practices.

And what exactly are those “unfair” trade practices: subsidizing their exporters who make auto parts cheaper than they can be made here. By subsidizing them to the tune of $1 billion, the Chinese government has reduced the cost of those auto parts to American manufacturers by $1 billion. But instead of saying “Thanks a lot, guys. We’re really appreciate that!” the White House wants to sue them to keep them from continuing to make those gifts to American manufacturers and, indirectly, to American consumers!

This is a political move, apparently, as Romney has gotten some traction in calling out the Obama administration for not doing enough to thwart those subsidies! Here is the Times:

Mitt Romney, the Republican presidential nominee, has repeatedly accused the Obama administration of not doing enough to challenge China on trade and currency policies.

This is political pandering to the ignorant. The ignorant are those who are persuaded that subsidies don’t offer benefits, only costs. Here’s how the Times explains the fallacy:

Auto parts employment in the United States has dropped by about one-half from 2001 to 2010, as imports from China grew nearly sevenfold over the same period, according to data provided by the senior official [in the Obama administration]…

But auto industry experts debate the extent to which those imports have been directly responsible for the closing of factories and for cutbacks at other plants, as ever-increasing automation has also played some role. The slowing of the American auto market since 2008 has had an effect as well…

When questioned about the motivation behind such a stupid move, an Obama administration official said:

President Obama has prioritized enforcement of Americans’ rights in the global trading system from day one, and this administration has a consistent record of action to support American jobs.

Yup. It’s all about saving American jobs even if someone somewhere else can do the same job cheaper.

Auto Industry China Currency Jobs Obama Republican Subsidies
This entry was posted on Sunday, September 30th, 2012 at 11:17 am and is filed under Economics, Politics. You can follow any responses to this entry through the RSS 2.0 feed. Both comments and pings are currently closed.
Many of the articles on Light from the Right first appeared on either The New American or the McAlvany Intelligence Advisor.