They’re Coming For Your Gold Coins

You ought to own some gold but don’t store it in the U.S., the Fed will take it away from you one day. 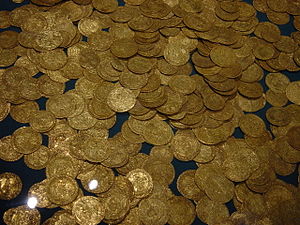 My reaction to this statement by Faber, otherwise known as Dr. Doom, is just short of incredulity. He’s been right, albeit early, about a number of predictions, including that the US is already in a recession and that gold will eventually hit $10,000 or higher as the currency debauchery continues and accelerates with the Fed’s new QE3 program.

But coming to take it away from us? Why would they do that?

Gary North is full of reactions to Faber’s statement:

I have some further thoughts on the matter. If the president (Obama, Romney, Biden, Ryan…take your pick) were to issue an executive order, who would enforce it? Would that be Treasury agents swarming all over the countryside? IRS agents? BATF agents? And while they’re at it, how about guns and ammo: “While we’re here we might as well pick these nasty items up as well.” Who’s going to go along with that?

Such an announcement or decree would be extremely costly to enforce. Where would the money come from? Wouldn’t the House of Representatives, where all spending bills start, begin to hear howls of outrage from you and me?

How would they “know” that we have a cache of coins, anyway? If we have been buying them for cash over the past many years, where is the paper trail?

I think North is right. Here is what he said about Faber’s statement:

When I hear that the federal government is going to confiscate all of our gold coins, I am amused. When I hear the Federal Reserve is going to do this, I am amazed that anybody who knows anything about gold owners of the United States would believe this is probable, let alone inevitable.

Currency Executive Order FDR Federal Government Federal Reserve Gary North IRS Monopoly Recession Spending
This entry was posted on Saturday, September 29th, 2012 at 3:18 pm and is filed under Economics, Politics. You can follow any responses to this entry through the RSS 2.0 feed. Both comments and pings are currently closed.
Many of the articles on Light from the Right first appeared on either The New American or the McAlvany Intelligence Advisor.