More than 150 people were arrested on Monday as protesters tried to block access to the New York Stock Exchange on the first anniversary of the Occupy Wall Street protests. 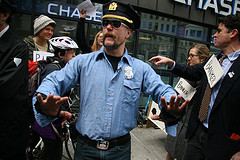 Ignore the fact that those arrested were Occupiers. Ignore that they have a different point of view that I do about how the world works, or should work. As long as they are peaceful, what’s the deal?

They wanted to sing Happy Birthday – the Occupier movement was one year old – but the police were having none of it:

The police countered the blockade planned by protesters with one of their own, ringing the streets and sidewalks leading toward the exchange with metal barricades…

The protestors didn’t disrupt things, according to The Times article. But 181 people were arrested anyway:

On several occasions, officers plunged onto sidewalks packed with protesters and arrested people after saying the crowds were blocking pedestrian traffic.

At one point, at Broad and Beaver Streets, a commander grabbed a man from a crowd standing on the corner. Protesters tried to pull the man back, but officers surged into the crowd and wrested the man away, placing him in handcuffs.

Free speech just wasn’t allowed. When one protester started protesting too loudly, the police just took him away. The article didn’t say if he was read his rights or was even charged:

Officers approached a man who had been yelling objections to the metal police barricades that cordoned off Wall Street. When the officers grabbed the man, he began shouting “I did nothing wrong,” but they removed him.

Oh, and no pictures were allowed to be taken either:

A line of officers pushed away a large crowd of people, including news photographers. One officer repeatedly shoved news photographers with a baton, and a police lieutenant shouted at one point that no more photographs would be permitted, adding, “That’s over.”

Oh, is that so? What’s “over.” Free speech? Freedom of assembly? Exercising rights to observe and record? Where is the First Amendment?

First Amendment Free Speech Freedom Occupy Wall Street Wall Street
This entry was posted on Saturday, September 29th, 2012 at 11:18 am and is filed under Constitution. You can follow any responses to this entry through the RSS 2.0 feed. Both comments and pings are currently closed.
Many of the articles on Light from the Right first appeared on either The New American or the McAlvany Intelligence Advisor.