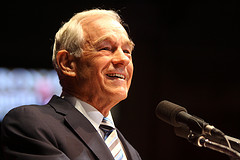 On Friday, Congressman Ron Paul, chairman of the House Subcommittee on Domestic Monetary Policy, invited James Grant and Lewis Lehrman to explore the unintended consequences of the Federal Reserve’s latest plan to install Quantitative Easing Number Three (QE3). The Fed’s announcement on September 13 that it would embark on an “open-ended” program to purchase mortgage-backed securities raised concerns about the long-term impact such a program would have on consumers, savers, and investors.

Grant, editor of Grant’s Interest Rate Observer, noted that “prices are the mechanism by which the economy operates” and when the Fed manipulates interest rates, it interferes with prices. In other words, the Fed, by its actions, is engaging in “financial price control” with predictable outcomes, distortions, and consequences:

But most importantly, according to Grant, the Fed’s willingness to continue to purchase government securities allows Congress to put off the “day of reckoning” — dealing with the inevitable consequences of price inflation that comes from overspending.

Lehrman’s plaints were similar: The Fed’s new plan allows the government to spend without limit or consequences, at least in the short run. Capital that would otherwise be invested in new capacity is instead shunted into money market funds and other safe havens while waiting for the skies to clear. Lehrman called the Fed’s plan “the most pernicious form of trickle-down economics,” noting that the banks are the primary beneficiaries of such activity, while borrowers have little incentive to take on the risk of making new investments.

Paul himself wrote that

because the coordination between savings and consumption was severed [by the Fed] through the artificial lowering of the interest rate, both savers and borrowers have been signaled into unsustainable patterns of economic activity. Resources that would have been used in productive endeavors under a regime of market-determined interest rates are instead shuttled into endeavors that only after the fact are determined to be unprofitable.

Once it is determined that those signals were false, capital that was misdirected into unprofitable use is liquidated, usually at significant losses. Paul explained:

In order to return to a functioning economy, those resources which have been malinvested need to be liquidated and shifted into sectors in which they can be put to productive use.

And so here is the paradox: The Fed continues to promote Quantitative Easing as a way to stimulate the economy but winds up encouraging the owners of capital into making bad investments, which reduces economic output.

Members of the Federal Reserve admit these distortions, and a few even criticize the Fed for its policies. For instance, Richard Fisher, the president of the Federal Reserve Bank of Dallas, spoke a few days after the Fed’s announcement, warning his audience in advance that he was a Texan, and consequently was given to speaking bluntly:

I am a Texan. I speak bluntly and directly. I am not given to circumlocution, and I checked diplomacy at the door when I gave up my post as an ambassador and trade negotiator. Please don’t take offense and please bear in mind that my comments this evening are mine alone; I do not claim to speak for anybody else in the Federal Reserve System.

Having dispensed with the niceties, Fisher then attacked:

With each program we undertake to venture further in that direction, we are sailing deeper into uncharted waters….

The truth … is that nobody on the committee, nor on our staffs at the Board of Governors and the 12 Banks, really knows what is holding back the economy. Nobody really knows what will work to get the economy back on course. And nobody — in fact, no central bank anywhere on the planet — has the experience of successfully navigating a return home from the place in which we now find ourselves….

This much we do know: Our engine room is already flush with $1.6 trillion in excess private bank reserves owned by the banking sector and held by the 12 Federal Reserve Banks. Trillions more are sitting on the sidelines in corporate coffers. On top of all that, a significant amount of underemployed cash — or fuel for investment — is burning a hole in the pockets of money market funds and other nondepository financial operators.

This begs the question: Why would the Fed provision to shovel billions in additional liquidity into the economy’s boiler when so much is presently lying fallow?

The Fed has effectively replaced the entire interbank money market and large segments of other markets with itself. It determines the interest rate by declaring what it will pay on reserve balances at the Fed without regard for the supply and demand of money.

By replacing large decentralized markets with centralized control by a few government officials, the Fed is distorting incentives and interfering with price discovery.

The four fellows from Hoover said there are least two more unintended consequences facing the Fed: eventually the new money will percolate into the economy, reducing the value of each dollar in circulation and showing up as price inflation at the consumer level. And that will be when the Fed faces its second consequence: unwinding the inflation it deliberately incurred in its attempts to stimulate the economy. Such unwinding, say the authors, “would be hard to manage [today], but will become ever harder the more the [Fed’s] balance sheet rises.” They concluded:

The problems are close to being unmanageable now. If we stay on the current path, they will wind up being completely unmanageable, culminating in an unwelcome explosion and crisis.

Even Paul Volcker, the venerable Fed chairman who was faced with a similar, although much smaller, need to do some unwinding in the early 1980s, said he’d never seen the Fed explode its balance sheet as it has in the last couple of years, calling it “the most extreme easing of monetary policy” that he could ever remember. He went on to admit that eventually price inflation will force the Fed’s hand into contracting its balance sheet — somehow:

The risk is that central bankers are not able to tighten policy in time. Will they be able to pull back fast enough from loose monetary policy?

That’s the ultimate consequence of unlimited, unending, infinite Quantitative Easing: when, and how, will the Fed reverse course? Will they be able to do it in time? Or will such a course change send the economy into another, even deeper, recession? Fed officials admit that they really don’t know.

Banking Central Bank Currency Economy Federal Reserve Fiat Currency Inflation Interest Rates Monetary Policy Money Supply Paper Money Quantitative Easing Ron Paul
This entry was posted on Thursday, September 27th, 2012 at 6:53 am and is filed under Economics. You can follow any responses to this entry through the RSS 2.0 feed. Both comments and pings are currently closed.
Many of the articles on Light from the Right first appeared on either The New American or the McAlvany Intelligence Advisor.