cnsnews.com – Gallup: Only 8% of Americans Have ‘Great Deal’ of Trust in News Media–a New Low

Only 8 percent of Americans say they have a “great deal” of trust in the news media, according to a new Gallup poll.

That is down from 11 percent a year ago and is a record low for the 40 years that Gallup has been polling on the question. 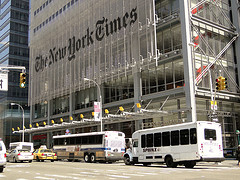 I’m not surprised. The mainstream (lamestream? downstream?) media has been controlled by the establishment insiders for years. I remember my grandfather saying (I was perhaps 10 years old at the time) that he thought the New York Times was “pink.”  I had to ask him what he meant. He said “pink” was just a light shade of “red” meaning communist. This was in 1950.

My personal experience with the credibility gap occurred while I was doing research prior to joining the John Birch Society in 1967. There was an attack on a police car in Detroit by some black revolutionaries, and there were two reports on the incident: one in the New York Times, and the other in American Opinion magazine (published by the JBS).

It was a watershed moment for me. I wanted to believe the New York Times. “All the News That’s Fit to Print,” the “Gray Lady,” the “Newspaper of record” and all that. I read the article carefully. It said the police fired on the innocent blacks first.

The American Opinion article, written by Alan Stang, said the blacks fired first. Stang went to Detroit. He interviewed the policemen involved. He even interviewed one of the black revolutionaries. Conclusion: the blacks set up the attack – it was an ambush – planned carefully in advance.

Nothing about that was in the NYT article.

I joined the JBS and never looked back.

Gallup is merely confirming what I learned from my grandfather 60 years ago: the mainstream media isn’t to be trusted.

Establishment John Birch Society Mainstream Media The New American
This entry was posted on Monday, September 24th, 2012 at 12:47 pm and is filed under Politics. You can follow any responses to this entry through the RSS 2.0 feed. Both comments and pings are currently closed.
Many of the articles on Light from the Right first appeared on either The New American or the McAlvany Intelligence Advisor.