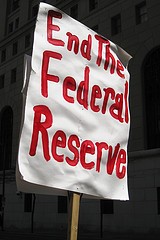 When the Federal Reserve announced last week its plan to buy more treasury securities, only a few read the fine print. Instead, the stock market jumped for joy at the news, leaping nearly 300 points on Friday.

What most market observers saw was the headline: “the [Federal Open Market] Committee agreed today to increase policy accommodation by purchasing additional … securities at a pace of $40 billion per month.” The press release added: “These actions … should put downward pressure on longer-term interest rates, support mortgage markets, and help to make broader financial conditions more accommodative.”

Those observers envisioned sugar plums dancing in their heads as the Fed’s plan would lead, no doubt, to more economic growth, more jobs, more profits, and more stocks to sell on Wall Street.

Catherine Mann, professor of finance at Brandeis University, expressed her doubts that

the new plan would do any such thing:

The Fed continues to want the economy to grow faster and specifically, to grow more jobs, but the ability of QE to do that is extraordinarily limited.

We know that QE reduced interest rates, but we also know that has not led to more construction, more mortgages, more business investment, or more lending. Since it hasn’t done any of that, it probably hasn’t created jobs either.

In fact, unemployment not only hasn’t fallen significantly since the start of the Fed’s rollouts of Quantitative Easings, but it has remained higher longer than any time since the early 1980s. Mark Gertler, an economist at New York University, estimated that if the monthly purchases continued long enough, whereby the Fed would purchase another $500 to $600 billion of securities, it might lower long-term interest rates by one-tenth of one percent — maybe. Stated Gertler, “We’re not talking about a major form of stimulus, but given [that] the job market is still unsettled, it could be useful. Everything else being equal, credit will be cheaper.

On the other hand, Dean Croushore, an economics professor at the University of Richmond, pointed out the problem facing the Fed, and it isn’t lower interest rates: It’s uncertainty about the future. He observed, “Business [owners] are not hesitant to invest and hire because interest rates are too high — they’re hesitant because of the uncertainty surrounding their future prospects.”

When Tyler Durden, writing at ZeroHedge, took a look at the fine print of the Fed’s press release, however, all he did was add to those business owners’ uncertainty. He calculated just how large the Fed’s balance sheet would be if the Fed purchased $40 billion every month through the end of the year 2013, and came up with the astounding total: $4 trillion.

But when Priya Misra of the Bank of America did the same math, he found Durden’s numbers to be too conservative, estimating instead that the Fed’s balance sheet would grow to over $5 trillion before it ended its newly announced program.

Here is the fine print the markets missed, but which Durden and Misra saw:

If the outlook for the labor market does not improve substantially, the Committee will continue its purchases of agency mortgage-backed securities, undertake additional asset purchases, and employ its other policy tools as appropriate until such improvement is achieved…. [Emphasis added.]

[Furthermore] the Committee expects that a highly accommodative stance of monetary policy will remain appropriate for a considerable time after the economic recovery strengthens. [Emphasis added.]

Skeptical observers of the ability of previous Fed programs to accomplish such improvements hold that that could be a long time — a very long time indeed.

Both Durden and Misra missed an important footnote that makes even their frightening estimates pale into insignificance to what the Fed’s balance sheet might really look like in a few years. According to the Fed, “These actions, which together will increase the Committee’s holdings of longer-term securities by about $85 billion each month through the end of the year, should put downward pressure on longer-term interest rates, support mortgage markets, and help to make broader financial conditions more accommodative.”

If the Fed decides to extend its Operation Twist program beyond the end of the year and into the year 2015 as anticipated by Misra at the Bank of America, then the math is irrefutable: 40 months of purchases totaling $85 billion a month is $3.4 trillion. The Fed’s balance sheet is currently at $2.7 trillion. That brings the Fed’s balance sheet, if nothing changes between now and then, to a mind-bending $6.1 trillion.

Picture a dam with flood waters pouring in behind it. The dam may be expressed, at present, as the unwillingness of lenders to lend and borrowers to borrow and spenders to spend. The Fed has a name for that dam: velocity of money, or the “money multiplier.”

This is the rate at which money circulates in the economy. In normal times that multiplier is about 1.5. It dropped precipitously at the start of the Great Recession to about 0.7 and has, until recently, stayed there as investors, savers, and business owners hunkered down and began paying off their debts rather than spending as they had previously.

But the dam, to extend the analogy, is beginning to give way. As this is being written, the multiplier has moved smartly higher in the last few months, and is now approaching 0.9.

If this continues to move higher, the dam holding back the flood of new money created by the Fed will fail, and the Fed’s current estimates of inflation at the retail level — as the Fed’s announcement said, “Inflation has been subdued…[and] longer-term inflation expectations have remained stable” — will have to be adjusted upward to reflect the reality of paper money inundating the economy and driving prices higher.

The consequent impact on “real” money, according to Durden, is highly predictable: Once the dam gives way, and velocity returns to historic levels, gold will be selling at $3,350 an ounce. And paper money will continue its descent to its intrinsic value.

Currency Economy Federal Reserve Great Recession Inflation Interest Rates Jobs Paper Money Recession Spending Unemployment
This entry was posted on Monday, September 24th, 2012 at 6:29 am and is filed under Economics. You can follow any responses to this entry through the RSS 2.0 feed. Both comments and pings are currently closed.
Many of the articles on Light from the Right first appeared on either The New American or the McAlvany Intelligence Advisor.