Romney Will and Won’t Raise Taxes on the Middle Class

Your [Romney’s] wish to “label China a currency manipulator” means that you seek a pretext to impose (as your website says) “countervailing duties” on imports from China – which is to say, you seek a pretext for raising taxes on Americans who buy goods and services from China.  (emphasis added) 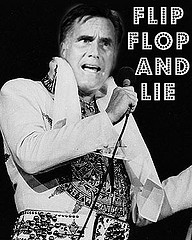 Donald Boudreaux is one of my favorite economists, not so much because he is a logical thinker, but because he can express himself so eloquently. In his letter to Romney, Boudreaux says that he expects Romney to lie, distort, misstate, obfuscate – after all, it’s politics:

A campaign, after all, is not a seminar for discovering truth.  It’s a verbal wrestling match to get votes by whatever means, regardless of how tawdry or devious.

But that’s beside the point. The real point is that by threatening to impose duties on Chinese goods as punishment for being a “currency manipulator” Romney wants to raise taxes on those same middle-income Americans.

But if you keep your promise to not raise taxes on the American people, you must – as I hope you will – break your promise to punitively tax those many Americans who buy imports from China.

But, hey, what would you expect from Romney? He’s running for president and will take “cheap shots” wherever he can, counting on Americans’ ignorance of how things work in the real world to support him. Saints preserve us!

China Currency Donald Boudreaux Taxes
This entry was posted on Sunday, September 23rd, 2012 at 11:26 am and is filed under Economics, Politics. You can follow any responses to this entry through the RSS 2.0 feed. Both comments and pings are currently closed.
Many of the articles on Light from the Right first appeared on either The New American or the McAlvany Intelligence Advisor.