Sowell Gives Obama Too Much Credit

Thomas Sowell – The Fallacy of Redistribution

The recently discovered tape on which Barack Obama said back in 1998 that he believes in redistribution is not really news. He said the same thing to Joe the Plumber four years ago. But the surfacing of this tape may serve a useful purpose if it gets people to thinking about what the consequences of redistribution are. 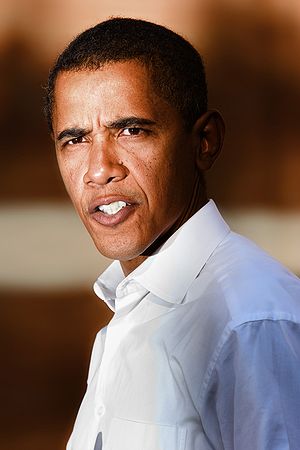 English: Barack Obama delivers a speech at the University of Southern California (Video of the speech) (Photo credit: Wikipedia)

Sowell is one of my favorite economists and expositors of the faith. Here he brings up a very good point: confiscation of present wealth always confiscates any future wealth that the individual might have created:

Farmers in the Soviet Union cut back on how much time and effort they invested in growing their crops when they realized that the government was going to take a big part of the harvest. They slaughtered and ate young farm animals that they would normally keep tending and feeding while raising them to maturity.

But then Sowell goes off in a direction that I disagree with: that’s it’s harder to steal in a democracy than in a dictatorship because so much “discussion” about the details of the theft has to take place first, giving the owners time to get out of Dodge:

A dictatorship can suddenly swoop down and grab whatever it wants. But a democracy must first have public discussions and debates. Those who are targeted for confiscation can see the handwriting on the wall, and act accordingly.

There are several problems here. First, this isn’t a democracy, it’s a republic, or at least that was the original idea. It’s been degraded into a democracy and is moving into a dictatorship. But regulators currently act like Russian czars – they’re even called czars here, amazingly enough, with little outcry from anyone, so far as I can tell – and they can, and do, issue confiscatory regulations with little public “discussion.”

Secondly, he assumes that, given enough advance warning, those with capital will employ “exit strategies” to preserve their wealth:

When successful people with much human capital leave the country, either voluntarily or because of hostile governments or hostile mobs whipped up by demagogues exploiting envy, lasting damage can be done to the economy they leave behind.

Fidel Castro’s confiscatory policies drove successful Cubans to flee to Florida, often leaving much of their physical wealth behind..

But where do wealthy people go when there are no places left?

But Sowell then engages in promoting the myth that the “redistributionists” are merely uninformed, and can be turned from their evil ways through education:

If the redistributionists were serious, what they would want to distribute is the ability to fish, or to be productive in other ways…

That would better serve the interests of the poor…

I can scarcely believe my eyes that he said he thinks that the redistributionists care a whit about the poor. They talk about the poor as justification for their theft, nothing more. Obama has relatives in Kenya, poor as church mice, whom he has refused to help in any way.

That’s Sowell’s blind spot: he gives the redistributionists more moral credit than they deserve. They are thieves, thugs and looters, and Sowell fails to grasp that.

Communism Economy Education Obama Regulations Socialism Theft
This entry was posted on Friday, September 21st, 2012 at 6:08 pm and is filed under Economics, Politics. You can follow any responses to this entry through the RSS 2.0 feed. Both comments and pings are currently closed.
Many of the articles on Light from the Right first appeared on either The New American or the McAlvany Intelligence Advisor.