The Election is Over: Obama Wins!

Intrade – Barack Obama to be re-elected President in 2012 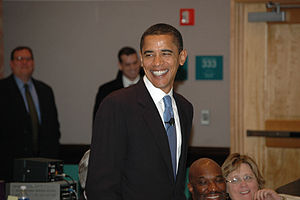 Gary North likes Intrade. He thinks their past record of predicting elections means that Obama is going to win the election in November.

Gary North thinks it’s because of the attacks on our embassies around the Mediterranean. It’s “rally ‘round the flag, boys” time for Obama.

But North also pooh-poohs the idea that this is “the election of the century.” I agree with him on that.  Intrade shows that the House of Representatives will remain Republican, and a good chance that the Senate will go Republican too.

So that spells gridlock, at least until 2014.

What about the fiscal cliff? Expediency will rule, in my opinion.  There will be some cuts in government spending but the Bush tax cuts will continue.

What about Obamacare? I don’t think it will be repealed. If it is somehow, it will be replaced with something equally onerous and wasteful and disruptive. So I’m making plans to provide for my own personal healthcare by finding a physician who doesn’t take Medicare and will accept direct payments from me, either on a monthly basis, or on an as-needed basis. In the meantime I’m following the rules of Dr. Joel Furhman, author of Eat to Live. I’ve lost 25 pounds, I’m sleeping well, and able to work long hours without getting tired.

North does provide some encouragement. I’m quoting now from his members-only newsletter (available for a small monthly fee at www.garynorth.com):

I do not understand how anyone in 2012 can believe that a boxed-in, lame-duck, teleprompter-dependent empty suit is a threat to them in some unique way.

It’s not over until the fat lady sings, but in a republic, the fat lady never sings. There is always another election.

2012 Elections Bush Tax Cuts Colorado Gridlock Healthcare House of Representatives Medicare Mitt Romney Obama Republican Senate Spending
This entry was posted on Thursday, September 20th, 2012 at 10:57 am and is filed under Politics. You can follow any responses to this entry through the RSS 2.0 feed. Both comments and pings are currently closed.
Many of the articles on Light from the Right first appeared on either The New American or the McAlvany Intelligence Advisor.