To support a stronger economic recovery and to help ensure that inflation, over time, is at the rate most consistent with its dual mandate, the Committee agreed today to increase policy accommodation by purchasing additional agency mortgage-backed securities at a pace of $40 billion per month. 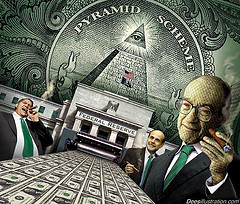 So, another $40 billion of new money pouring into the economy, right? That’s how the Fed operates: it doesn’t borrow the money to buy those mortgage-backed securities that banks are holding (and would love to get rid of and dump onto the Fed). It’s going to “create” that new money and use it to buy them.

That’s the classical definition of inflation. It’s also a classic indicator of panic on the part of the Fed. I mean, what else could they do? The only tools they have are deception and printing.

Information received since the Federal Open Market Committee met in August suggests that economic activity has continued to expand at a moderate pace in recent months. Growth in employment has been slow, and the unemployment rate remains elevated. Household spending has continued to advance, but growth in business fixed investment appears to have slowed. The housing sector has shown some further signs of improvement, albeit from a depressed level. Inflation has been subdued, although the prices of some key commodities have increased recently. Longer-term inflation expectations have remained stable.

Let’s look at these highlighted parts of the Fed announcement:

Economic recovery has continued to expand at a moderate pace in recent months.

What recovery? ECRI called for a recession a year ago, iterated its position back in June, and just reiterated it again last week. John Huntsman and Mish Shedlock both concur: we’re already in a recession.

Growth in employment has been slow.

Slow? How about non-existent? It’s growing so slowly that more people are leaving the workforce than are being hired. How about that for “slow?”

It’s actually much worse than officially reported (more reliable estimates put the rate at 15 percent, some even higher). The unemployment rate went down because of those people ending their job search efforts!

Growth in business fixed investment appears to have slowed.

Well, what would you expect? Would you invest in this economy now? Why? The Fed is awfully slow in coming to this obvious conclusion.

The housing sector has shown some further signs of improvement, albeit from a depressed level.

The prices of some key commodities have increased recently.

Oh, really? Have you looked at the price of gold and silver lately? The are setting new highs as I’m writing this!

Deceive and print: how about that as a strategy to get the economy moving again?

Central Bank Economy ECRI Federal Reserve Fiat Currency Inflation Mortgage-Backed Securities Paper Money Recession Spending Unemployment
This entry was posted on Wednesday, September 19th, 2012 at 5:52 pm and is filed under Economics. You can follow any responses to this entry through the RSS 2.0 feed. Both comments and pings are currently closed.
Many of the articles on Light from the Right first appeared on either The New American or the McAlvany Intelligence Advisor.