The Passing of Thomas Szasz

Thomas Szasz, a psychiatrist whose 1961 book “The Myth of Mental Illness” questioned the legitimacy of his field and provided the intellectual grounding for generations of critics, patient advocates and antipsychiatry activists, making enemies of many fellow doctors, died Saturday at his home in Manlius, N.Y. He was 92. 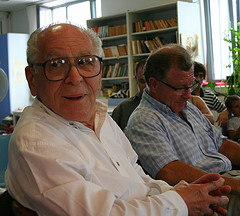 Szasz was skillful in pointing out the obvious in such a way as to infuriate his colleagues. Essentially he was the little girl in the crowd who pointed out that the king had no clothes. And for that his voice was diminished by the establishment mental health crowd.

But not entirely snuffed out, as this article in The Times notes. It quoted the president of Alliance for Human Research Protection:

We did not agree on everything, like his view that there is no such thing as mental illness. But his message that people get designated as ill, labeled and then shafted out of society and preyed on by an industry dominated by drugs — that’s where he was very valuable.

And this from Dr. E. Fuller Torrey, founder of the Treatment Advocacy Center:

For the record, I will say that I admired him, even though I think he was dead wrong about the nature of schizophrenia. But he made a major contribution to the issue of the misuse of psychiatry. His message is important today.

You can almost hear him say this through clenched teeth. As Bryan Caplan pointed out in his “The Economics of Szasz,”

From a rent-seeking perspective, skepticism about psychiatry is common sense. Rent-seeking is only a side activity for the auto industry, but it lies at the core of psychiatry. As Szasz (1990: 178) puts it, “The business of psychiatry is to provide society with excuses disguised as diagnoses, and with coercions justified as treatments”.

And there you have it: Szasz saw through the fraud of psychiatry, wrote about it, and managed to tick off an awful lot of people in the process. But even the New York Times had to admit that he had a point.

Establishment Fraud
This entry was posted on Wednesday, September 19th, 2012 at 11:36 am and is filed under Uncategorized. You can follow any responses to this entry through the RSS 2.0 feed. Both comments and pings are currently closed.
Many of the articles on Light from the Right first appeared on either The New American or the McAlvany Intelligence Advisor.