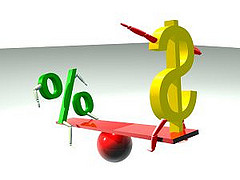 Complaints from savers about low rates of return on their money have reached the business page of the New York Times. According to the Times, when Bill Taren, a retiree living near Orlando, Florida, learned that his credit union would pay just 0.4 percent interest on his savings, he decided to take the money out of the bank and put it into his mattress because, he said, “at least there we can see the cash.”

It was worse for Julie Moscove of Fort Lauderdale, Florida. Over the last four years, she has watched her interest income drop from $2,000 a month to $400 a month. She said, “It’s ridiculous. I cut coupons now.”

And Dorothy Brooks has been forced to go back to work in order to supplement what’s left of her retirement income, after being retired for the last 10 years:

I got hit a couple of years ago pretty badly in the stock market, so now my savings are weighted mostly toward bonds. Now both investments are terrible. And I can’t put my money in a money-market account because that’s crazy. That just pays nothing.

Keynesian economic policies allegedly designed (and sold to the American people) to stimulate the economy are actually having the perverse effect of stimulating government spending and putting off the inevitable day of reckoning when interest rates inevitably begin to rise.  As the Times writer Catherine Rampell noted:

Though bad for people trying to live off their savings, low interest rates happen to be quite good for anyone borrowing money, like governments themselves.

Over time, interest rates below the inflation rate allow governments to refinance, erode or liquidate their debt, making it easier to live within their budgets without having to resort to more unpalatable spending cuts or tax increases.

In the nearly four years that the Fed set its benchmark interest rate at zero, the government has saved trillions of dollars in interest payments. If interest rates today were what they were in 2007, the Treasury would be paying about twice as much to service its debt.

Those numbers are mind-numbingly huge. The federal government currently owes $16 trillion and is paying more than $350 billion a year in interest to its lenders. If interest rates rise just to the level where they were in 2007, prior to the beginning of the Great Recession, those payments would double to more than $700 billion. That’s close to a third of the entire revenue stream of the government.

The Keynesian “magic” isn’t working in the housing market either. Despite the lowest financing rates in history, people are not flocking to buy new homes. Part of the reason is that many have damaged credit, thanks to the recession, and can’t qualify. Part is because there is such a huge overhang of bank-owned real estate still waiting to be cleared from the market. Part is the unknown number of homes waiting to come onto the market when prices do eventually start to rise so that homeowners can get out from under onerous mortgage payments. Most important is the downsizing taking place as the Baby Boomers retire and put their now-too-large homes on the market and move to smaller quarters in town houses and condominium developments.

Besides, why would investors “rush in” to take advantage of low rates when they know that the Fed is determined to keep them low for years to come?

Pension funds are also being adversely affected. Pension plans rely on only two sources to provide the funds for their beneficiaries: contributions from workers and their employers, and earnings on invested assets. As those earnings decline, contributions must increase, or the beneficiaries will be shorted when they retire. Many pension plans have assumed they could earn seven to eight percent on their assets, but the real world of unintended consequences is forcing them to reduce those estimates. This increases the level of contributions the plans’ sponsors and participants must make to keep the plans solvent. This is creating shortfalls and severe underfunding. The inevitable result for plans’ beneficiaries is easy to see: lower payouts, starting later.

The insurance industry is also being hit by the low interest rates imposed by the Fed. When they can’t earn enough to pay out the promised benefits, premiums for such instruments as annuities and long-term-care policies must go up. Most policies already in force cannot have their premiums raised, and so premiums for new policyholders go up instead. This makes those policies less attractive.

Something else is going on that few are paying attention to: the bond market “bubble.” Ever since interest rates hit 21 percent in the early 1980s, long term bonds have been in a bull market (bond values move inversely to interest rates). And the holders of long-term bonds — pension plans, well-to-do individuals, and investors — have reaped enormous profits as their holdings have increased in value. But that game is over.

The only way for interest rates to go is up. When that happens, bond values will begin to fall. If they fall sufficiently, bond holders will begin to sell before they get hurt, putting more pressure on the market, reducing prices further.

This is the classic definition of a “bubble,” and just one more unintended consequence of keeping interest rates low, all in obedience to the Keynesian dictum that eventually — somehow — the economy will start to revive.

In principle, the low real interest rates should encourage younger generations to borrow against their future income prospects and consume more today. However, this demographic group faces high unemployment rates and tighter borrowing constraints, which may limit its ability and willingness to leverage up to finance consumption.

Consequently, the consumption of the older generations may be damaged by the low real interest rates without any countervailing increase in consumption by other households in the economy.

“Counterproductive” is how a supporter of failed Keynesian stimulus and zero interest rates says, “We may have made a serious mistake.”

Indeed they have. Here’s the rule: If capital is punished, there will be less of it. At present capital is being extracted from those who have it and given to the federal government who needs it to pay its bills. It avoids, for the time being at least, the necessity of going directly to taxpayers.

Central Bank Economy Federal Government Federal Reserve Fiat Currency Housing Market Income Tax Inflation Insurance Interest Rates Keynesian Paper Money Pension Real Estate Retirement Spending Taxes Unemployment
This entry was posted on Tuesday, September 18th, 2012 at 6:42 am and is filed under Economics. You can follow any responses to this entry through the RSS 2.0 feed. Both comments and pings are currently closed.
Many of the articles on Light from the Right first appeared on either The New American or the McAlvany Intelligence Advisor.