Am I Allowed to Disagree with Chuck Norris?

Part of what makes America great is that every two years, we, too, cast our votes, rendering judgment on whether lawmakers have fulfilled their promises. And every four years, as in 2012, our opportunity extends to the highest office in the land. 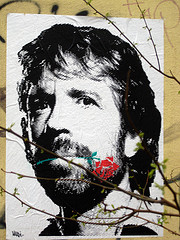 I grieve that Norris is so misinformed about how the elections work in the real world. The campaigns for the White House have been controlled and manipulated by the insiders – especially the Council on Foreign Relations – for decades. The only exception was Goldwater in 1964 and you remember how the establishment moved Heaven and earth to paint him as a war monger in order to discredit him. The strategy worked, and we got Johnson.

I like the way Gary North puts it: no matter who wins in November, the CFR wins. He considers the Republicans and the Democrats to be CFR “Team A” versus CFR “Team B.” Or as my friend Jack McManus likes to say: “We have two political parties in this country, and the RepublicanDemocrats is one of them.”

Now it is true that informed citizens – informed citizens – can and do have an impact on Congress, especially the House of Representatives which members have to come back into their districts every two years to retain their seats. And we are making progress there.  The Senate? Not quite so much. The six-year terms there invite “assimilation by the Borg” as I put it. The best example is Lyndon Johnson who “went to Washington intending to do good, and wound up doing very well indeed.”

I disagree also with Norris when he thinks Romney will do better in selecting Supreme Court justices than would Obama:

The president also nominates judges for all levels of the federal bench. That is why we need to make sure we have a president whose nominees for any court — including the Supreme Court — will support the original meaning of our Constitution.

As we have seen recently, Romney has successfully ignored the Constitution vis-à-vis Obamacare and Romneycare. Why should he all of a sudden become a strict constructionist when appointing a Supreme Court justice? The real action is in the Senate which, under the Constitution, must consent to the appointment. But Norris doesn’t mention that.

Oh well, I’m sure Norris’ heart is in the right place.

2012 Elections Constitutional Council on Foreign Relations Democrat Establishment Gary North House of Representatives LBJ Mitt Romney Obama Obamacare Republican Senate Supreme Court War
This entry was posted on Monday, September 17th, 2012 at 3:20 pm and is filed under Constitution, Politics. You can follow any responses to this entry through the RSS 2.0 feed. Both comments and pings are currently closed.
Many of the articles on Light from the Right first appeared on either The New American or the McAlvany Intelligence Advisor.