The Fed’s Credibility Continues to Fade

Reuters – At Jackson Hole, a growing fear for Fed independence

Increasing political encroachment on the Federal Reserve, particularly from the Republican Party, could threaten the central bank’s hard-won independence and undermine confidence in the nearly 100-year old institution. 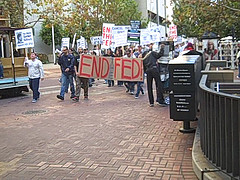 Reuters is the British equivalent of The New York Times – thoroughly establishment and its voice in England. When they see that the Fed’s credibility is beginning to suffer, you know that the end is near.

The article said that this was “the pervasive sentiment” at the recent Jackson Hole conference (where, as you remember, Bernanke spoke and said nothing).

Alan Blinder was there. He is the quintessential establishment economist: degrees from Princeton, the London School of Economics, and MIT. Served on Clinton’s Council of Economic Advisors and on the Board of Governors of the Fed. He dreamed up the “cash for clunkers” fiasco that was designed, according to Blinder, to stimulate the economy. We know how well that worked.

I do fear for it a bit if the election comes out that way, especially if some of the more radical voices, that happen to be Republican voices nowadays, get reelected. There’s a lot of hostility.

We know who he is referring to: Ron Paul. And what he’s referring to: the bill that recently passed the House to do a full and complete audit of the Fed.

Buried in the article from Reuters was something amazing: that “radical” influence is already beginning to impact the Fed’s behavior! Part of that was reflected in Bernanke’s heavy emphasis on something he couldn’t prove: that the Fed kept things from getting worse. This is not an argument from substance but from conjecture. It was his way of defending the indefensible.

In all, the Jackson Hole conference did accomplish something: an admission by an establishment mouthpiece that the trust and credibility of the Fed continues to decline, and there’s nothing they can do about it.

Ben Bernanke Central Bank Council of Economic Advisors Council on Foreign Relations Establishment Federal Reserve Fiat Currency Jobs Obama Paper Money Republican Unemployment
This entry was posted on Sunday, September 16th, 2012 at 9:43 am and is filed under Economics. You can follow any responses to this entry through the RSS 2.0 feed. Both comments and pings are currently closed.
Many of the articles on Light from the Right first appeared on either The New American or the McAlvany Intelligence Advisor.