GREGORY: But are you going to, will you cut a deal to compromise even if it risks a conservative revolt?

ROMNEY: There’s nothing wrong with the term compromise but there is something very wrong with the term abandoning one’s principles. And I’m standing by my principles and that is, I am not going to raise taxes on the American people. The problem in our country is not that we’re not paying enough taxes, it is that we are spending too much money and the economy is not growing as it could and should… 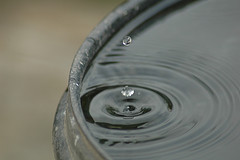 A drop in the bucket. (Photo credit: Pranav Singh)

I’m already in revolt against Romney. I find him revolting. And I find his “promise” that he will not abandon his principles offensive. As I just wrote, he is already abandoning whatever principles he has (a la repealing Obamacare).

This is plain political pandering, in my opinion. The man will say whatever he thinks he needs to say to continue to deceive conservatives who are looking for a savior to rescue us from Obama.

For his part, Gregory, on Meet the Press, also has his agenda: trying to get Romney to say something eye-catching that will improve his ratings. So everyone has an agenda here.

Of course the government is spending too much money. But whatever Romney has in his plan – Gregory cut him off before he could go into it in any detail – it won’t be enough. No one is talking about the elephant in the living room: the $222 trillion in debts that the government has run up. The paltry demand to cut government spending by a few trillions over the next decade reminds me of the following interchange between W. C. Fields, a known alcoholic, and a friend:

Friend:  Guess what, WC – I drink a quart of whisky every day. What do you think about that?

2012 Elections Conservative Democrat Economy Jobs Mitt Romney Obama Spending Taxes Unemployment VAT
This entry was posted on Sunday, September 16th, 2012 at 5:43 pm and is filed under Economics, Politics. You can follow any responses to this entry through the RSS 2.0 feed. Both comments and pings are currently closed.
Many of the articles on Light from the Right first appeared on either The New American or the McAlvany Intelligence Advisor.