Gun Sales Spiking Thanks to Obama, “Preppers” and Even Zombies! 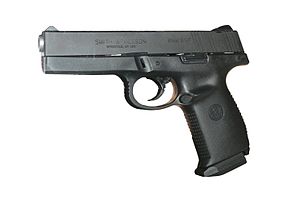 After gunmaker Smith & Wesson announced late Thursday afternoon, September 6, that their sales had jumped by nearly 50 percent from a year ago, the company’s share price rocketed from $9 to $11 within minutes of the opening of trading on Friday morning.

Specifically, the company announced that sales were up 48.3 percent from the same quarter last year and that profits had nearly doubled. In addition, its backlog of orders jumped more than 163 percent, causing Jeffrey Buchanan, Smith & Wesson’s chief financial officer, to raise the company’s expectations for 2013:

Based on our stronger than anticipated first quarter, [and] current consumer orders for our products … we are increasing our full year 2013 financial guidance.

S&W’s announcement followed a similar announcement by Sturm, Ruger & Company — better known simply as Ruger — on August 20 that the gunmaker was on schedule to beat last year’s record of 1,114,700 firearms produced in a year, having already made one million of them by August 15. Mike Fifer, Ruger’s CEO, was delighted:

Last year, Ruger became the first commercial firearms company to produce one million firearms in one year, and we were incredibly excited and proud to reach that milestone. It took us nearly all of 2011 to build one million firearms, but in 2012 we accomplished it on August 15th.

We continue to invest in and improve our manufacturing processes to help us respond to the strong demand for Ruger firearms. We expect 2012 will be another record-breaking year for Ruger, and we want to thank our loyal customers for their continued support.

Growth in gun sales is also reflected in the increase in background checks required under the law when a purchase is made at a gun shop. The 1.5 million checks done in August was 17 percent higher than in July, and was the 27th straight monthly gain as buyers lined up to buy guns and ammunition.

ABC News noted the trend in gun sales back in April and tried to determine why. When Cris Parsons, owner of the Houston Armory, was asked why, he pointed to the president and to two hot cultural trends involving growing interest in preppers and zombies.

Parsons noted that the president has “never been pro-gun” and that he would have “nothing to lose” in promoting his anti-gun agenda if he is reelected.

Interest in preppers, or survivalists, is fueled by the National Geographic Channel show “Doomsday Preppers,” which (as described on its website) “explores the lives of otherwise ordinary Americans who are preparing for the end of the world as they know it.” According to the website:

Unique in their beliefs, motivations, and strategies, preppers will go to whatever lengths they can to make sure they are prepared for any of life’s uncertainties. And with our expert’s assessment, they will find out their chances of survival if their worst fears become a reality.

And then, says Parsons, “there’s this whole Zombie Apocalypse thing,” fueled by zombie movies, TV shows, comic books, etc., that depict societal collapse and the need for self-defense. Of course, if society were to disintegrate, zombies would not be the cause. But fascination in all things zombie has led to some gunmakers to produce zombie-specific guns including some with a picture of a zombie on them.

There is a fourth motivation driving the sales of weaponry: the need to buy a gun for self-protection. Right after the shooting in Aurora, Colorado, in July, sales at Hyatt Guns in Charlotte, North Carolina, went through the roof. Said Larry Hyatt:

We were overwhelmed [on the day after the Aurora shooting]. We had to have 25 people on the counter to help customers…

Once people start[ed] hearing about that, they said “Wow! I was planning on doing this. I better do it now.”

An anti-gun bill offered by Senator Frank Lautenberg (D-N.J.) and Representative Carolyn McCarthy (D-N.Y.) following the Aurora shooting to ban online sales of ammunition added to the anxiety of concerned citizens. Asked about the president’s position on the bill, Deputy Press Secretary Josh Ernest said only that the bill will be “evaluated” by President Obama. However, Ernest’s answer only inflamed those concerns:

The president’s views … have been relayed quite frequently over the last few days … he said that he believes in the Second Amendment of the Constitution and the right to bear arms.

But he also believes we should take robust steps within existing law to ensure that guns don’t fall into the hands of criminals or others who shouldn’t have them.

This whole pattern of fear of an uncertain future and politicians only too happy to exploit them is wholly predictable, according to Gary North. Writing at his Tea Party Economist blog, North concisely described how it works:

Not every defender of the Second Amendment is unhappy about the president’s “work” on the gun agenda. Ted Nugent, the musician, author of God, Guns and Rock ‘n’ Roll, and board member of the National Rifle Association, says that the president ought to be thanked and given some love:

President Obama is single handedly responsible for the ongoing record setting avalanche of gun and ammunition sales all across America. This is because rank and file Americans do not trust the president and his clear and present anti-gun team….

This is great news for Second Amendment freedom addicts and we should give ample praise to the president for his ability to stimulate gun and ammo sales without federal stimulus dollars or a massive bail-out….

As a guy about to launch his very own line of superior firepower ammunition this summer, I could not be happier. Keep up the great work, Mr. President!

President Obama is deserving of our support and adulation. It is because of him that gun and ammo sales are going through the roof. He is the greatest gun salesman in the history of America.

Oh, the splendor and the irony….

You are great for the gun business. I can already hear the soul music of backup alarms as pallets of Ted Nugent Ammo is delivered to my fellow Americans. God bless America. God bless President Obama.

Constitutional Democrat Freedom Gary North Gun Control NRA Obama Republican Second Amendment
This entry was posted on Sunday, September 16th, 2012 at 6:39 am and is filed under Constitution. You can follow any responses to this entry through the RSS 2.0 feed. Both comments and pings are currently closed.
Many of the articles on Light from the Right first appeared on either The New American or the McAlvany Intelligence Advisor.