Romney on the Jobs Numbers: Here We Go Again

Justin Sink – Romney: ‘If last night was the party,’ jobs report is ‘hangover’

For every net new job created, nearly four Americans gave up looking for work entirely. This is more of the same for middle class families who are suffering through the worst economic recovery since the Great Depression.

After 43 straight months of unemployment above 8 percent, it is clear that President Obama just hasn’t lived up to his promises and his policies haven’t worked. We aren’t better off than they were four years ago. 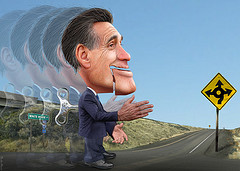 This is an interesting way of looking at the jobs numbers. I wondered why the unemployment rate went down when so few new jobs were created. Now I know why: four times as many people left the work force as found jobs.

Now there’s a statistic for you!

But all of this is political rhetoric and posturing by Romney. Underlying his comments as the basic assumption – the incorrect assumption – that he can do better. This is from the RNC’s chairman Reince Priebus:

The indisputable message of today’s job report: We’re not creating jobs fast enough, and we’re certainly not better off than we were four years ago. Time is up Mr. President.

Recently I wrote at The New American about Romney’s “five-point plan” to put Americans back to work, noting that not a single one of them addressed any fundamental strategy that actually would put anyone back to work – except him, as President.

The fundamental problem is: it isn’t jobs that are important. It’s creating the environment where entrepreneurs hire people to do work, in the hopes of making a profit by providing a service or product that people will pay for.

There’s a wonderful story (that I borrowed, and credited properly to a business school professor who had his head screwed in straight) about an engineer travelling in China. It could just have well have happened in Washington, DC, but no matter:

An engineer traveling in China observed a large crew of men building a dam using just picks and shovels. When he asked why they weren’t allowed to use heavy earth-moving equipment which would have completed the project in just a few weeks rather than the months the project was taking, he was told that using that equipment would cost many of the men their jobs.

The engineer responded, “Oh! I thought you were interested in building a dam. If it’s more jobs you want, why don’t you have your men use spoons instead of shovels?”

2012 Elections China Economy Environment Jobs John Birch Society Mitt Romney Obama The New American Unemployment
This entry was posted on Saturday, September 15th, 2012 at 3:55 pm and is filed under Economics, Politics. You can follow any responses to this entry through the RSS 2.0 feed. Both comments and pings are currently closed.
Many of the articles on Light from the Right first appeared on either The New American or the McAlvany Intelligence Advisor.