Clinton: No president could have fixed this?

Mark Murray – Clinton: No one could have restored economy to full health in 4 years

What I [Clinton] can do….is explain why I think his approach is right and it’ll pay off if we renew his contract. [What I can do is] explain why the economy he faced was much weaker and different than the one I faced, so that there’s no way any president, no president could have restored it to full health in just four years. 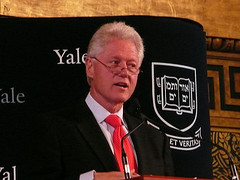 This is jaw-droppingly ignorant of history, both recent and past. Some commentators have referred to Reagan’s “recovery” as one example of a rapid recovery from a recession. But that example is highly flawed. And it assumes that Reagan had anything to do with any such recovery at all. It is an argument that is flawed as well.

The economy when Jimmy Carter took over in 1976 was stagnant. Remember “stagflation” and Carter’s use of the word “malaise?” It was because of regulations, poor foreign policy decisions, and lack of certainty about the future that was holding the economy back. Inflation was eating away at people’s purchasing power, and Carter was quickly discerned to be weak and ineffective.

By 1979 inflation was running at 13 percent per year. At that rate, prices would double every four years (this is the rule of 72: divide the inflation rate into 72 and you get a doubling of the price level every 4 years.)  That was frightening.

I was operating an office in Aspen, Colorado, at the time as an investment advisor. For a brief time I had my office inside a realtor’s office and was privy to what was happening in the Aspen real estate market at the time. Some of the realtors had put together price projections of where real estate prices would be if an investor would just buy now. It didn’t matter that prices were so high – so very high – that they had little basis in reality. Don’t look back, they said. Look forward! And out would come the charts: if you bought now, you’d be rich in 10 years!

And then along came Paul Volcker who decided – against the wishes of many – to raise interest rates to rinse out such inflationary expectations from the economy. He knew that such increases in the price level could destroy the economy and set the country (and the banks, especially the banks) back at least one generation.

He forced interest rates to over 20 percent, and quashed those expectations. But in so doing he set the stage for an economic recovery that just happened to take place when, guess who – Reagan – happened to be in the White House.

So let’s not hear any more nonsense about how a president can’t “fix” the economy in four short years. The president can do little about the matter at all.

Bill Clinton Economy Foreign Policy Inflation Interest Rates Jimmy Carter Paul Volcker Real Estate
This entry was posted on Saturday, September 15th, 2012 at 12:47 pm and is filed under Economics, Politics. You can follow any responses to this entry through the RSS 2.0 feed. Both comments and pings are currently closed.
Many of the articles on Light from the Right first appeared on either The New American or the McAlvany Intelligence Advisor.