Since they decide nothing, only about one in five unaffiliated voters tunes in for most of the convention coverage. Even the major networks, themselves products of a bygone era, have figured this out and have limited coverage to an hour a night. Only 14 percent of all voters wish there were more. 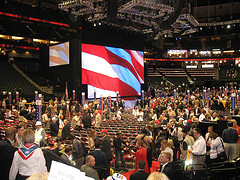 Scott Rasmussen heads up Rasmussen Reports whose poll results I often quote when I’m writing for The New American magazine. He has his finger on the pulse of America more closely than most other pollsters, I think, and so, when he talks, I listen.

The Republican Party even changed the rules at the convention to minimize Ron Paul’s impact, making that convention even less important.

Rasmussen says that unaffiliated voters don’t watch the political conventions. I think he’s right. I haven’t watched anything on TV even though nearly every channel – annoyingly – was covering the Republican convention at the time I wanted to watch something. So I turned it off.

But Rasmussen makes another point: the viewers, like me, don’t trust the media to present fairly what’s happening:

Only 22 percent believe reporters even try to offer unbiased coverage of political news. Instead, the general public sees most reporters as activists trying to help their favored candidate. Most believe reporters are so in the tank for their team that they would bury a scoop rather than release information that might hurt the cause.

Propaganda is a form of communication that is aimed at influencing the attitude of a community toward some cause or position. Propaganda is usually repeated and dispersed over a wide variety of media in order to create the chosen result in audience attitudes.

Since voters know it’s propaganda, why would they subject themselves to it? Answer: they won’t, and they don’t. That’s why political conventions are irrelevant and a waste of time.

2012 Elections John Birch Society Rasmussen Republican Ron Paul The New American
This entry was posted on Friday, September 14th, 2012 at 3:59 pm and is filed under Politics. You can follow any responses to this entry through the RSS 2.0 feed. Both comments and pings are currently closed.
Many of the articles on Light from the Right first appeared on either The New American or the McAlvany Intelligence Advisor.