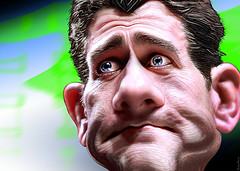 Russ Roberts is an economics professor at George Mason University’s Mercatus Center, which means that he is a conservative, probably an Austrian school economist, and that he has a special gift of insight. This brief article of his illustrates all of this:

[Ryan’s Roadmap is] like a car company that sends me a brochure for their new car. The car looks fantastic: 80 mpg, safer than a tank, has a twenty year warranty, parks itself, has tons of leg room in the back and trunk but it’s smaller than a normal-sized sedan. And it’s only $12,000.

This is dreamland. No, this is fantasyland. Here’s the catch: you can’t buy one:

But his analogy is apt. We don’t buy cars this way. But we’re sold politicians this way!

It’s easy to say you’re going to get government down to 20% of GDP. I’d prefer a smaller number, but that’s a start.

But when he doesn’t tell me how he’s going to do it, it’s like saying you’re going to sell me a car that doesn’t exist but when it does exist it’s going to get 200 mpg and still be a functional gasoline-powered car that seats six and not a lawn mower.

Before I order one, I’d like to know how he’s going to manage that.

When he says he has a plan to create 12 million jobs in the next four years, I really don’t feel well at all.

Don’t look too closely at the brochure, and for Heaven’s sake don’t look at the fine print. If you do, you’ll see the scam:

It’s a beautiful brochure but I’ve seen so many of those brochures before.

2012 Elections Austrian School Jobs Paul Ryan
This entry was posted on Friday, September 14th, 2012 at 9:30 am and is filed under Economics, Politics. You can follow any responses to this entry through the RSS 2.0 feed. Both comments and pings are currently closed.
Many of the articles on Light from the Right first appeared on either The New American or the McAlvany Intelligence Advisor.