“Liberal Generosity” is an Oxymoron

There are 366 major metropolitan areas in the United States, and a comprehensive new study by the Chronicle of Philanthropy ranks them on the basis of generosity—the percentage of income the median household in each city gives to charity. According to the Chronicle, the most generous city in America is Provo, Utah, where residents typically give away 13.9 percent of their discretionary income.

Boston, by contrast, ranks No. 358: In New England‘s leading city, the median household donates just 2.9 percent of its income to charity. 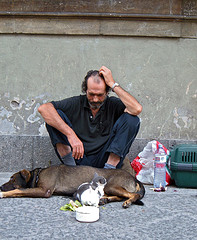 I’ve thought about this. I’ve just thought it was hypocrisy on the part of liberals. They want to be generous, but with other peoples’ money, not their own.

The data from the Chronicle of Philanthropy simply confirms what other studies over the years have shown: “Americans who lean to the left politically tend to be much less charitable than those who tilt rightward.”

Jacoby notes a study going back as far as 1996 when it was learned that conservatives give away four times as much to charity as do liberals. “Liberal generosity” is an oxymoron.

It appears to be cultural:

The Chronicle’s new study, which is based on IRS records from 2008 (the most recent available), accounts for regional differences in the cost of living. It calculates charitable giving only from discretionary income—the dollars left over after paying for taxes, housing, and food.

But the economic differences are not nearly as significant as cultural differences. In parts of the country where conservative values dominate, charity tends to be high. Where liberalism holds sway, charity falls. “Red states are more generous than blue states,” the Chronicle concludes. The eight states that ranked the highest in charitable giving all voted for John McCain in 2008. The seven lowest-ranking states supported Barack Obama.

What is Jacoby’s conclusion: it’s the liberal philosophy that it’s the government’s job to be charitable and so they don’t have to be: “Where people are encouraged to think that solving society’s ills is primarily a job for government, charity tends to evaporate.”

Does that mean that if you’re a liberal, you’re also selfish? Just asking.

Conservative Hypocrisy IRS John McCain Liberal Obama Taxes
This entry was posted on Tuesday, September 4th, 2012 at 3:07 pm and is filed under Politics. You can follow any responses to this entry through the RSS 2.0 feed. Both comments and pings are currently closed.
Many of the articles on Light from the Right first appeared on either The New American or the McAlvany Intelligence Advisor.