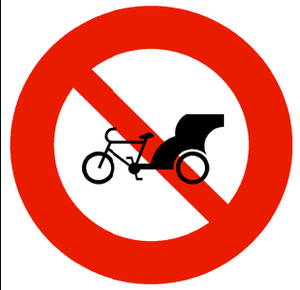 This sounds like a cool idea: pedicabs would help people get around town. It would be cheap, convenient, fun, reduce emissions, reduce congestion, add some panache and charm to an already charming (I am told) town. The advantages go on and on: they would free up parking space and employ pedalers who could make, they estimate, up to $20 an hour—more with tips if they’re extra-courteous or offer advice or commentary along the way. But no:

After dealing with the frustrating regulations placed on his business, the unwillingness of city leaders to allow him to serve customers on both sides of the river (pedicabs are banned from using the bridges that span the Tennessee River in downtown Chattanooga, including a pedestrian bridge) and difficulties in selling ads on the pedicabs, Thoreson decided yesterday to throw in the towel and close Buzz Chattanooga… Regulations stifle entrepreneurs’ ability to innovate, and prevent them from improving their businesses, serving more customers and, ultimately, making Chattanooga a better place.

Here’s the best quote I’ve seen that perfectly expresses the consequences of government regulations. It takes Obama’s ridiculous statement that “you didn’t build it” and turns it right side up:

Look, if you’ve been unsuccessful, you didn’t get there on your own. If you were unsuccessful at opening or operating a small business, some government official along the line probably contributed to your failure. There was an overzealous civil servant somewhere who might have stood in your way with unreasonable regulations that are part of our American system of anti-business red tape that allowed you to not thrive. Taxpayers invested in roads and bridges, but you might have faced city council members who wouldn’t allow you to use them. If you’ve been forced to close a business—it’s often the case that you didn’t do that on your own. Somebody else made that business closing happen or prevented it from opening in the first place. You can thank the bureaucratic tyrants of the nanny state.

Christian Obama Regulations Small Business
This entry was posted on Tuesday, September 4th, 2012 at 9:41 am and is filed under Economics. You can follow any responses to this entry through the RSS 2.0 feed. Both comments and pings are currently closed.
Many of the articles on Light from the Right first appeared on either The New American or the McAlvany Intelligence Advisor.