Why Not Sell Natural Gas Abroad?

Once in a great while, the nation gets a problem that’s actually nice to have. The latest example: the huge windfall of domestic natural gas from shale deposits, and the growing debate over whether to export some of it. 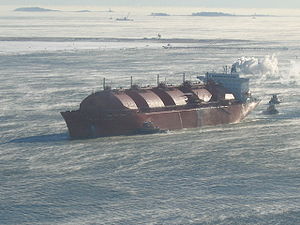 What debate? How could anyone question the advisability of offering our cheap natural gas overseas where it costs five times as much? Doing the economic math is simple: profit-seeking exporters will put their capital to its highest and best use, foreign purchasers will see their costs go down and make energy more available. So far as I can see it’s a win-win all around.

But no. There’s a “debate” about whether this is wise. First of all gas companies, under some rule set in place in 1938 (74 years ago!), have to ask permission to do so! What’s up with that?

Second, opposers think our natural gas prices will rise as those nasty foreigners bid up the price and make the supply dwindle. I fail to see how that would happen, but even if it did, wouldn’t that just create more investment opportunity for producers to produce more? I mean, let’s give the law of supply and demand a little credit here, ok? It isn’t called a law for nothing.

Sure, there are some difficulties in liquefying it into LNG and getting it to the purchasers. But that’s part of the equation that producers operating in the free market will make. If the profits are high enough, facilities will be built to handle it. And, by the way, that will put people to work in real jobs—not make-believe green ones—which is a natural (sorry) result of growth in the economy.

Even energy magnate T. Boone Pickens has got it wrong. He sides with the Sierra Club (over alleged environmental “concerns”) that exporting natural gas would be wrong, but for a different reason: “Why let our foreign competitors take advantage of our cheap energy?”

Why not? I must be missing something here.

Energy Free Market Gas Prices
This entry was posted on Sunday, September 2nd, 2012 at 2:57 pm and is filed under Constitution, Economics, Politics. You can follow any responses to this entry through the RSS 2.0 feed. Both comments and pings are currently closed.
Many of the articles on Light from the Right first appeared on either The New American or the McAlvany Intelligence Advisor.