[Camden] Mayor Dana Redd is unable to even order two police union bosses, whose salaries are paid for by taxpayers, to fulfill their duties to serve the Camden community…

The two officers claim that their union contract requires taxpayers to pay them for conducting union activities, rather than provide police services. 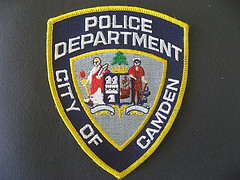 This is how two union bosses think: despite Camden, New Jersey’s financial woes (caused in large part by over-generous pensions negotiated by the unions) which have forced the city to merge its police operations into the county’s Metro Police Division in order to save money, they consider their jobs as union bosses more important than what they are actually being paid for: police work.

City residents have paid two police union presidents their full combined salary of $180,000 in 2011 for the equivalent of 13 years to do work for the union while avoiding the performance of any and all law enforcement work. Not only that, but the primary activities performed on union release time include collective bargaining and representing members at grievance and lobbying, which pit the union against the city.

In addition, public employees on union release time accumulate pension and healthcare benefits without contributing a penny to pay for them. According to the New Jersey Division of Pensions and Benefits formula, Williamson alone is eligible for a lifetime pension amounting to slightly over $16,000 per year for life, just for doing union duties.

But there appears to be a way out. The New Jersey state constitution prohibits making “gifts” to these people: “No county, city, borough, town, township or village shall hereafter give any money or property, or loan its money or credit, to or in aid of any individual, association or corporation.”

It is time to stop giving away taxpayers’ hard-earned dollars to public servants who refuse to perform work we all pay them to do. Enforcing the Gift Clause would be a good start.

Collective Bargaining Competitive Enterprise Institute Healthcare Jobs Pension Unions
This entry was posted on Saturday, September 1st, 2012 at 9:34 am and is filed under Economics. You can follow any responses to this entry through the RSS 2.0 feed. Both comments and pings are currently closed.
Many of the articles on Light from the Right first appeared on either The New American or the McAlvany Intelligence Advisor.