The World is Waiting for Jackson Hole 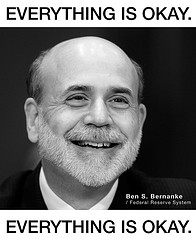 Federal Reserve Chairman Ben Bernanke is expected to give his annual Jackson Hole speech on August 31 while the world waits in anticipation. They are likely to be disappointed.

In past years the invitation-only event hosted by the Kansas City Fed in Jackson Hole, Wyoming, has been an opportunity for Bernanke to suggest future Fed policy actions. In 2010 he said that a second round of stimulus—called QE2 for Quantitative Easing Round Two—was likely, and in November of that year the Fed began its purchase of another $600 billion of long-term debt securities.

Some investors are expecting nothing but a repeat of Bernanke’s talk in Jackson Hole last August when he said: “The Federal Reserve will certainly do all that it can to help restore high rates of growth and employment” but “most of the economic policies that support economic growth in the long run are outside the province of the central bank.”

Which was a banker’s way of saying, “We’re pushing on a string here, but nobody’s pulling at the other end.” Skeptics such as Axel Merk, president of Merk Investments, said that continued pushing wasn’t likely to have any impact:

I don’t think they’re under any illusion that another round of easing will boost economic growth. Interest rates are already so low, the marginal benefit you get from additional money [added to the system] has diminished.

Most observers, although watching and listening carefully to his remarks, are expecting nothing. Allen Sinai, chief global economist for Decision Economics, said that “people will be disappointed” if they think Bernanke is going to announce something audacious. Catherine Mann, a finance professor at Brandeis University, agrees: “I don’t think he’s going to say anything new.” Mark Gertler, an economics professor at New York University, is doubtful Bernanke will offer up anything novel:

There have been mixed signals making it hard to tell what’s going on. We’re sort of in a gray area. I think Bernanke will make the case that the economy is underperforming, but it’s still hard to tell for sure what direction it’s headed…

The Fed’s main problem is Congress. I fully expect Bernanke to give a good speech and say the Fed will do all it can, but it’s no substitute for responsible fiscal policy. He will probably make a plea that Congress try and act responsibly. Good luck with that.

Bernanke did offer a bit of titillating news in a letter he wrote to Representative Darrell Issa (R-Calif.) last week, noting, “There is scope for further action by the Federal Reserve to ease financial conditions and strengthen the recovery.” But that did little to move the equity markets, which have languished in the heat of the summer. Of 18 trading days in August only once has the Dow Jones Industrial Average moved more than one percent, and on five days it moved less than one-tenth of one percent.

There are some who are hopeful that Bernanke will signal another program of easing—QE3—such as Charles Evans of the Chicago Fed:

I don’t think we should be in a mode where we are waiting to see what the next few data releases bring. We are well past the threshold for additional action; we should take that action now.

But the risks of doing something outweigh the risks of doing nothing. First, adding additional money to the already over-capitalized banking system will eventually lead to significant price inflation. As Annalyn Censky, writing for CNN Money, put it: “Much of that extra money the Fed has pushed into banks is just sitting there, not making it out to consumers and business[es]. But if the economy starts recovering at a faster pace, that money could pour into the economy very quickly, igniting rapid [price] inflation.”

That would force the Fed’s hand to rein in that money supply in order to quench that price inflation, something previous Fed chairman Paul Volcker was forced to do when price inflation hit 13 percent in 1981. Volcker raised interest rates to 20 percent in June of that year, quelling the inflation but pushing the economy into recession.

Such a rise in interest rates would set off a cascade of events including raising the cost of financing the government’s enormous national debt. At present it’s costing the government about $450 billion a year to finance its $16 trillion debt. If another “Volcker event” took place, those financing costs could skyrocket to an unsustainable $3 trillion annually—exceeding the government’s total revenues.

This would have untold negative consequences in the bond market as investors looking for safety of principal (and willing at present to loan money to the U.S. government at less than three percent just to get it) would be likely to look elsewhere.

Even today serious doubt is being cast on the government’s ability to service its debt, much less begin to pay it down. Jeffrey Bergstrand, a finance professor at Notre Dame, wrote:

The Fed has this huge balance sheet and they don’t quite know how to unwind all those securities down the road. That creates an uncertainty to foreign central banks and investors that are holding any kind of instrument with a U.S. label on it.

You never know when China and Japan are going to say “we don’t want to hold this stuff” and those things can turn on a dime.

There’s another risk: Bernanke announces some new twist or purchase arrangement, and it doesn’t work either. This puts the Fed’s credibility, already heavily damaged not only by its role in setting the stage for the Great Recession but now for its impotence in remedying its aftereffects, at additional serious risk. Eric Lacelles, chief economist for RBC Global Asset Management, put it well: “The biggest risk is, if it doesn’t work [then] the market concludes [that] the Fed is losing its impact.”

In 1953 a play written by Samuel Beckett entitled “Waiting for Godot” premiered in Paris, which follows two men waiting expectantly—vainly—for someone named Godot to arrive. They claim that Godot is an acquaintance but in fact they barely know him and admit they wouldn’t recognize him even if he showed up. To occupy their time they eat, sleep, converse, argue, sing, play games, exercise, swap hats, and contemplate suicide—anything “to hold the terrible silence at bay.”

On August 31, Fed Chairman Ben Bernanke will show up in Jackson Hole, but is likely to have little to say.

Banking Ben Bernanke Central Bank China Darrell Issa Economy Federal Reserve Fiat Currency Great Recession Housing Market Inflation Interest Rates Money Supply Paper Money Recession Unemployment
This entry was posted on Friday, August 31st, 2012 at 6:52 am and is filed under Constitution, Economics. You can follow any responses to this entry through the RSS 2.0 feed. Both comments and pings are currently closed.
Many of the articles on Light from the Right first appeared on either The New American or the McAlvany Intelligence Advisor.