GM: Trying to Please Too Many Masters

Obama talks about the auto bailout frequently, since it’s one of the few things in his record that gets positive responses in the polls. But he’s probably wise to avoid probing questions, since the GM bailout is not at all the success he claims. 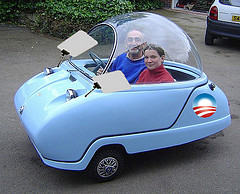 Aptly (and properly, in my opinion) called Government Motors, the old GM is still on life support, but of a different kind: trying to please too many masters is keeping the company from being as competitive as it might be, and will cost taxpayers—you and me—more and more money to keep it going.

Obama thinks otherwise, and why shouldn’t he? He is enamored with government and thinks everything should be run or controlled by government czars. After all, that’s what collectivists do: they collect!

His recent speech in Colorado illustrates this well:

Of course he and his auto czars had to stiff bondholders by skirting, illegally, the usual bankruptcy process, but, hey, this is socialism: we can’t let niceties like contracts and the rule of law get in the way! And if you were a GM dealer who wasn’t connected to the Obama administration, well, sorry about that, you’ll have to go.

And how’s GM doing? Well, profits just dropped 41 percent, and its stock is at $21, down from $40 when it went public following the bailout. Government still owns some 500 million shares, which translates into a loss to taxpayers approaching $25 billion.

And according to Louis Woodhill, an auto analyst at Forbes, GM is likely headed for bankruptcy once again.

Auto Industry Bankruptcy Colorado General Motors Obama Socialism
This entry was posted on Tuesday, August 28th, 2012 at 3:54 pm and is filed under Economics, Politics. You can follow any responses to this entry through the RSS 2.0 feed. Both comments and pings are currently closed.
Many of the articles on Light from the Right first appeared on either The New American or the McAlvany Intelligence Advisor.