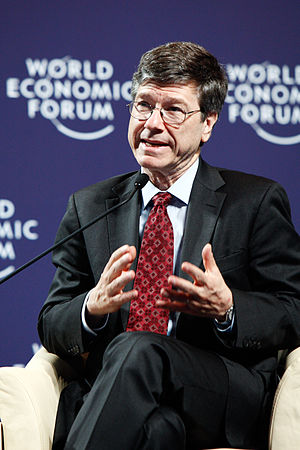 In his article in London’s Financial Times, professor Jeffrey Sachs laments the inevitable shrinkage in America’s federal government, regardless of which political party takes the White House in November. Calling the national elections “a full-throated ideological brawl…the small-government agenda has already prevailed. No matter who is elected on November 6, dangerous cuts in public goods and services are already in train.”

Sachs’ point of view is that government is the central provider of goods and services, especially for those who can’t afford them. According to Sachs,

[This is] Radical stuff.

But the Obama administration, if it is returned to power, would be no different, he says. Obama “has also already accepted a brutal shrinkage of government programs in coming years. The similarities of the Obama budget and Mr. Ryan’s are striking.” For instance:

Mr. Obama’s budget would shrink non-security discretionary programs from an already insufficient 3.1 per cent of GDP in 2011 to 1.8 per cent in 2020.

In bemoaning Mr. Obama’s budget, I do not mean to equate it with Mr. Ryan’s. Mr. Ryan’s budget is nothing short of heartless in the face of the dire crisis facing America’s poor. It is also reckless, guaranteed to leave millions of children without the quality of education and skills they will need as adults. Yet the sad truth is that the Democrats offer no progressive alternative.

Both parties are accomplices to the premeditated asphyxiation of the state.

Sachs, of course, suffers from an irremediable disease: infatuation with big government. A graduate of Harvard University and now a professor of “Sustainable Development” at Columbia University, Sachs has been drinking the internationalist and interventionist government Kool-Aid for years. Prior to his stint at Columbia, Sachs served as a special advisor to the last two Secretaries-General of the United Nations for something called Millennium Development which, among other things, wishes to implement, from the top down, “environmental sustainability”—code for international regulation of citizens, all in the name of maintaining the environment. Missing from Sach’s bio, not surprisingly, is his membership in the internationalist Council on Foreign Relations which has promoted the same agenda for years.

But the middle class keeps getting in the way. As Taylor Caldwell put it:

The middle class made the dream of liberty a possibility, set limits on the government, fought for its constitutions, removed much of governmental privilege and tyranny, demanded that rulers obey the just laws as closely as the people, and enforced a general civic morality.”

And those limits on government have, so far, kept government spending from reaching the ethereal levels of socialist Europe. But Sachs’ view, predictably, looks at those limits askance:

Viewed from an international perspective, the constricted range of the US fiscal debate is striking. Total US government revenues (combining federal, state and local governments) in 2011 came in at about 32 per cent of GDP. This compares with an average of 44 per cent in the EU and 50 per cent in northern Europe.

He concludes that, either way, “the demise of public goods and services [in the US] will continue apace.”

For James Dorn, a scholar at the limited-government, pro-freedom Cato Institute, this was just too much to swallow:

The federal government now spends 24 percent of GDP, up from 18 percent a little over a decade ago under President Clinton, and is expected to spend nearly $10 trillion in excess of taxes during the next decade, pushing up federal debt to more than $26 trillion.

Gross federal debt is already more than 100 percent of GDP and that doesn’t count the more than $100 trillion of unfunded liabilities in Medicare and Social Security.

There have been no real cuts in the size and scope of government under either party.

The fundamental problem with Sachs’ worldview is that, in America, government was deliberately designed to be limited in scope, and not to be an enabler for redistributing peoples’ wealth to those who didn’t earn it. Sachs is part of the elites who “implicitly assume that government has a right to our property.” Instead, says Dorn:

The primary function of government in a free society is to safeguard property rights and “secure the Blessings of Liberty” so people can pursue their own happiness.  Fundamental rights to life, liberty, and property precede government and reside in the people as natural rights. That view of the relation between the state and the individual was what made the American experiment with freedom so unique.

And that is what has made the middle class wealthy and prosperous, up until the last ten years. According to the Pew Research Center, as the federal government has grown in size, reach and cost, the middle class has predictably gotten smaller—much smaller. Middle-class median income has fallen from $72,956 annually to $69,487 while its net worth has dropped precipitously—from $152,950 to just $93,150—a decline of 39 percent just since 2000. Laments Pew:

Since 2000, the middle class has shrunk in size, fallen backward in income and wealth, and shed some…of its characteristic faith in the future…

For the first time since the end of World War II, mean family incomes declined for Americans in all income tiers. But the middle-income tier…is the only one that also shrunk in size…a trend that has continued over the past four decades.

The real solution to reversing the trend is not “getting with the program” and trying to play catch up to European-style government spending as Sachs implies, but going in the opposite direction: less government spending, lower taxes, fewer regulations, and more individual responsibility. As Robert Welch explained to members of the John Birch Society in July, 1975:

The ideal way of alleviating poverty is by enabling and encouraging the poor to improve their own lot. The greatest help in the world to that end is a middle class, especially one with a very wide spread in its economic boundaries…

When class lines are vague, and classes overlap, the middle class is a comprehensive term reaching from a good percentage of day laborers to an even larger percentage of bank presidents…it is only extreme irresponsibility or government handouts that will keep the “poor” of today from becoming members of the “middle class” of tomorrow. [Emphasis added.]

Sachs laments what he perceives as unconscionable the limits that the political parties allegedly plan to place on government spending. It must seem, therefore, that he wishes to impoverish America’s middle class even further. His worldview prevents him from seeing the real answer to a thriving economy and a stronger middle class: less government, not more.

2012 Elections Cato Institute Constitutional Council on Foreign Relations Deficit Democrat Economy Education Elite Energy Federal Government Freedom GDP Healthcare John Birch Society Liberty Medicaid Medicare Natural Rights Obama Paul Ryan Pew Research Center Spending Taxes The New American Unemployment United Nations War
This entry was posted on Monday, August 27th, 2012 at 6:47 am and is filed under Economics. You can follow any responses to this entry through the RSS 2.0 feed. Both comments and pings are currently closed.
Many of the articles on Light from the Right first appeared on either The New American or the McAlvany Intelligence Advisor.