James Dorn: Jeffrey Sachs Has It Backwards: The State Is Asphyxiating the People

In an article in the Financial Times (“The US has already lost the battle over government,” Aug. 16), Jeffrey Sachs, director of the Earth Institute at Columbia University, argues that “for all the rhetoric, the small-government agenda has already prevailed.”

His punch line is: “Both parties are accomplices to the asphyxiation of the state.”  The reality is that the state is asphyxiating the people. 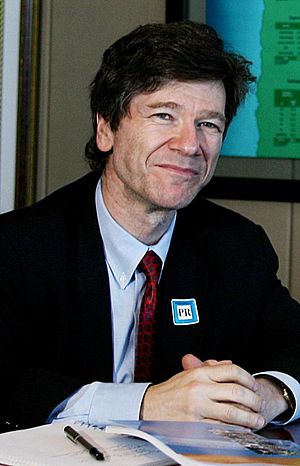 In an amazing article by Jeffrey Sachs (all you need to know about this guy is that he is a professor of Sustainable Development at Columbia) he accuses both Obama and Ryan of stifling the growth of the state!

Here’s some proof from Sach’s article:

Whether Mr Obama or Mr Romney wins, the “non-security” discretionary budget—for education, job skills, infrastructure, science and technology, space, environmental protection, alternative energy and climate change adaptation—is on the chopping block. Mr Obama’s budget would shrink non-security discretionary programmes from an already insufficient 3.1 per cent of GDP in 2011 to 1.8 per cent in 2020. (my emphasis)…

Mr Ryan’s budget is nothing short of heartless in the face of the dire crisis facing America’s poor. It is also reckless, guaranteed to leave millions of children without the quality of education and skills they will need as adults.

Yet the sad truth is that the Democrats offer no progressive alternative. Both parties are accomplices to the premeditated asphyxiation of the state.

After reading this I feel like I’m living in an alternate universe from Sachs. But along comes James Dorn to put things back into proper perspective:

The federal government now spends 24 percent of GDP, up from 18 percent a little over a decade ago under President Clinton, and is expected to spend nearly $10 trillion in excess of taxes during the next decade, pushing up federal debt to more than $26 trillion.  Gross federal debt is already more than 100 percent of GDP and that doesn’t count the more than $100 trillion of unfunded liabilities in Medicare and Social Security.

There have been no real cuts in the size and scope of government under either party.

Thank you, Mr. Dorn. For a minute there I thought I’d died and gone to socialist hell.

Democrat Education Energy Federal Government GDP Medicare Obama Taxes
This entry was posted on Monday, August 27th, 2012 at 11:21 am and is filed under Economics. You can follow any responses to this entry through the RSS 2.0 feed. Both comments and pings are currently closed.
Many of the articles on Light from the Right first appeared on either The New American or the McAlvany Intelligence Advisor.