Already Made Up Your Mind About Paul Ryan? Read This!

Chuck Baldwin: Paul Ryan is More of the Same

It has happened again. We go through this every four years, and every four years the vast majority of “conservatives” fall for it. This is such a broken record. What did Forrest Gump say: “Stupid is as stupid does”? And wasn’t it P.T. Barnum who said, “There’s a sucker born every minute”? Well, here we go again. 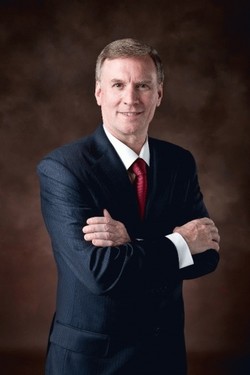 This is a photo of Dr. Charles “Chuck” Baldwin, the 2008 Constitution PartyPresidential candidate. (Photo credit: Wikipedia)

If you’re still with me, then you’re still open to talk about Ryan. Before we do, however, I need to tell you a little more about Chuck Baldwin. Once you know his background then you’ll understand why he is credible and why what he says is important.

I’m going to take a couple of quotes from Wikipedia’s entry about Baldwin which I think fairly presents the man. First, from Wiki’s general introduction:

Charles Obadiah “Chuck” Baldwin (born May 3, 1952) is an American politician and founder-pastor of Crossroad Baptist Church in Pensacola, Florida. He was the presidential nominee of the Constitution Party for the 2008 U.S. presidential election and had previously been its nominee for U.S. vice president in 2004. He hosts a daily one-hour radio program, Chuck Baldwin Live, and writes a daily editorial column carried on its website, on News with Views, and on VDare.

As a Republican Party member, Baldwin was state chairman of the Florida Moral Majority in the 1980s. However, during the 2000 campaign of Republican George W. Bush for U.S. President, Baldwin left the party and began a long period of criticism of Bush. Baldwin endorsed U.S. Representative Ron Paul for the 2008 Republican nomination for president, and Paul in turn endorsed Baldwin for the presidency in the 2008 general election.

Baldwin supports ending U.S. involvement in the United Nations, reducing U.S. income taxes, and repeal of the Patriot Act. He would withdraw troops from Iraq and seek to end illegal immigration by enforcing immigration laws. He supports the gold standard, the right to keep and bear arms, homeschooling, and the proposed Sanctity of Life Act, which would define “human life” and legal personhood as beginning at conception, and prevent federal courts from hearing cases on abortion-related legislation.

This entry from Wiki illustrates his character. He quit his church in Florida and moved to Montana. He thinks he will be more effective in the freedom fight there.

Think about this: here is a successful pastor, highly regarded by his flock, who gives it up to get more involved in the fight to preserve our freedoms. Name another pastor like that. I can’t think of one. My own pastor never said one word about the freedom fight from the pulpit during his seven years of preaching. Talk about a disconnect from reality! I love the man and his message. And I miss him (he just left our church to teach young pastors how to preach). But he never said one word, ever, about the approaching totalitarian storm that is gathering about us. And neither will his students.

Here’s the Wiki entry about his move to Montana:

In 2010, Baldwin retired from his position as pastor of Crossroad Baptist Church and announced his intention to move to Montana, because he believed God had told him that the Mountain states were the “tip of the spear in the freedom fight…”

In a June 9, 2011 article, Baldwin outlined his reasons for choosing the Flathead Valley of Western Montana for his family’s home. He cited Montana’s freedom-loving people, its recognition of the right to keep and bear arms, and a feeling of strong conviction, following prayer.

That’s why, when he has something to say, I usually listen closely. Here’s what he has to say about Paul Ryan:

Let’s just get this on the record: since 1960, there have only been two Presidential nominees (from the two major parties) who were not controlled by the globalist elitists. One was a Democrat, John F. Kennedy; the other was a Republican, Ronald Reagan. Kennedy was shot and killed; Reagan was shot.

Every other President, Democrat or Republican, has been totally controlled, which is why none of them have done diddly-squat to make a difference in the direction of the country. On the issues that really matter, Mitt Romney and Paul Ryan are just more of the same!

Here’s what you don’t want to know if you still think Ryan is a true conservative:

Jane Aitken wrote an excellent synopsis of Paul Ryan’s voting record that appeared on LewRockwell.com. She noted that Ryan voted for federalizing rules for driver licenses; voted to make the Patriot Act permanent; voted to allow electronic surveillance without a warrant; voted to authorize military force in Iraq; voted to spend an “emergency” $78 billion for the wars in Iraq and Afghanistan; voted to declare Iraq part of the “War on Terror” with no exit date; and voted against redeploying US troops out of Iraq.

There it is. Ryan is just one more kept politician working to fool conservatives into thinking he’s one of them. He’s not.

2012 Elections Abortion Chuck Baldwin Constitutional Democrat Freedom George W. Bush Illegal Immigration Iraq John F. Kennedy Medicare Military Mitt Romney Patriot Act Paul Ryan Republican Ron Paul
This entry was posted on Monday, August 27th, 2012 at 3:33 pm and is filed under Constitution, Politics. You can follow any responses to this entry through the RSS 2.0 feed. Both comments and pings are currently closed.
Many of the articles on Light from the Right first appeared on either The New American or the McAlvany Intelligence Advisor.