Is the Obama Newsweek Article a Message From the CFR?

The financial crisis a few weeks before the last presidential election was enough to push Barack Obama over the top. This week’s Newsweek cover slamming President Obama could have almost as much impact.

“Hit the Road, Barack—Why We Need a New President” the cover says. “Obama’s Gotta Go” the article inside says. 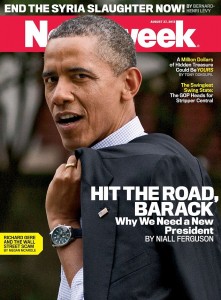 Ron Kessler, the author of this article, knows more than he is telling us. He gives us a clue, however:

Having been a reporter for the Washington Post and Wall Street Journal, I know how susceptible journalists are to the herd instinct. The Newsweek cover story in effect tells journalists it’s OK to begin telling the truth about Obama and expose his presidency as the failure Newsweek says it is. For that reason, it could be a turning point in the election.

WaPo and the WSJ are insider publications, as is Newsweek. By insider, I mean the people at the top have connections with the power elite, usually tied into membership in the Council on Foreign Relations.

The CFR has been pushing for world government—The New World Order—for decades, which requires the dismantling of American sovereignty leading to its “comfortable merger” into the NWO.

Surely Kessler knows about this connection. Why doesn’t he mention it?

He fails to tell us that Niall Ferguson, the British author of the Obama Newsweek article, is also a member of the CFR. He is highly regarded.

From the Wikipedia website it’s easy to find just how highly regarded he really is:

In 2004, he was named as one of the 100 most influential people in the world by Time magazine. Since 2011, he has been a contributing editor for Bloomberg Television and a columnist for Newsweek. As of 2012, he is working on the official biography of Henry Kissinger to whom he has been granted unprecedented access. (my emphasis)

That’s worth repeating: Ferguson has been granted unprecedented access to one of the most powerful insiders living today. That access wouldn’t have been granted if Ferguson wasn’t on the inside.

And this is the message, from the inside: Barack’s days are over. It’s OK to bash him, excoriate him, expose him, obliterate him, make him disappear. His job is finished. So long, adios, ciao baby!

This part Kessler gets right:

The Newsweek cover story in effect tells journalists it’s OK to begin telling the truth about Obama and expose his presidency as the failure Newsweek says it is. For that reason, it could be a turning point in the election.

2012 Elections Council on Foreign Relations Elite Establishment Mitt Romney Obama Sovereignty Wall Street
This entry was posted on Tuesday, August 21st, 2012 at 3:20 pm and is filed under Politics. You can follow any responses to this entry through the RSS 2.0 feed. Both comments and pings are currently closed.
Many of the articles on Light from the Right first appeared on either The New American or the McAlvany Intelligence Advisor.