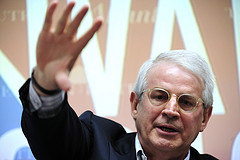 Calling potential Republican vice-presidential candidate Paul Ryan’s “Path to Prosperity” budget plan a “fairy tale,” David Stockman, President Ronald Reagan’s budget director from 1981 to 1985, took Ryan’s plan to task for not recognizing reality and for leaving behind the legacy of the GOP’s glory days when it reveled in touting small government.

Stockman said that Ryan’s plan to give tax cuts to “job creators” will do nothing to help create jobs, but instead will only put additional pressure on the middle class to come up with more revenues to fund the yawning federal deficit. Stockman conjured the images of “the true conservatives of modern times” like Herbert Hoover and Dwight Eisenhower who, if they were here, would decry the present GOP’s infatuation with what he calls “neoconservative imperialism” and the spending that goes along with it.

Ryan’s plan to push more of the Medicaid responsibility back onto the states through a voucher system is “hypocrisy,” according to Stockman, and merely postpones the reality of a welfare system that isn’t working and can’t work. Instead, says Stockman:

A true agenda to reform the welfare state would require a sweeping, income-based eligibility test, which would reduce or eliminate social insurance benefits for millions of affluent retirees. Without it, there is no math that can avoid giant tax increases or vast new borrowing. Yet the supposedly courageous Ryan plan would not cut one dime over the next decade from the $1.3 trillion-per-year cost of Social Security and Medicare.

What’s really needed, according to Stockman, is more taxes to close the deficit gap: “We need a national sales tax—a consumption tax, like the dreaded but efficient value-added tax—but Mr. Romney and Mr. Ryan don’t have the gumption to support it.”

The elephant in the living room in any discussion about budgets and government spending has to be Grover Norquist, the founder and president of Americans for Tax Reform and the promoter of the “Taxpayer Protection Pledge.” In the current Congress all but six of the 242 Republican members of the House plus two Democrats—a majority—have signed the pledge, along with 40 of the 47 Republicans in the Senate plus one Democrat. And Ryan is one who signed it and took it seriously. So seriously in fact that he helped derail the so-called Simpson-Bowles Plan in December 2010 because it proposed tax increases along with promised spending cuts. And Ryan knows his history well enough to know that tax increases take place immediately while spending cuts are put off forever.

One, oppose any and all efforts to increase the marginal income tax rates for individuals and/or businesses; and

Two, oppose any net reduction or elimination of deductions and credits, unless matched dollar for dollar by further reducing tax rates.

All Ryan is doing, says Norquist, is keeping his word:

Mr. Ryan said no. He learned from the 1982 and 1990 budget deals that promised spending reduction in return for real, permanent tax hikes [never materialized]. The tax hikes were real. Spending increased rather than decreased. Paul Ryan learned from history and walked away from false promises with the complaints of the entire Washington establishment sounding in his ears.

And that’s what has Washington up in arms about Ryan’s plan: the man has no “give”—no tax increases without enforced spending cuts elsewhere.

In perspective, with the nation facing $1 trillion plus deficits for years into the future, the Paul Ryan budget is pitifully weak. When the Congressional Budget Office (CBO) “scored” Ryan’s bill, The Path to Prosperity, it concluded that, if enacted, it would balance the budget by the year 2030, and bring the national debt down to 10 percent of the country’s gross domestic product by the year 2050.

Stockman’s criticism of Ryan’s proposal reflects a poor memory and a willingness, once again, to concede that the only solution to the deficit and debt is more taxes made in exchange for more promises of future spending cuts.

2012 Elections Americans for Tax Reform CBO Deficit Democrat Economy Eisenhower Elite Establishment Grover Norquist Income Tax Insurance Jobs Medicaid Medicare National Debt Paul Ryan Republican Ronald Reagan Senate Social Security Spending Taxes Taxpayer Protection Pledge VAT
This entry was posted on Tuesday, August 21st, 2012 at 6:59 am and is filed under Economics, Politics. You can follow any responses to this entry through the RSS 2.0 feed. Both comments and pings are currently closed.
Many of the articles on Light from the Right first appeared on either The New American or the McAlvany Intelligence Advisor.